The NC3Rs is dedicated to replacing, refining and reducing the use of animals in research and testing (the 3Rs). Our funding schemes are essential in delivering our mission by supporting the scientific community to develop, validate and apply 3Rs methods, tools and technologies. Additionally, our funding supports early career development, facilitates open innovation and commercialisation of 3Rs technologies, and bridges the gap between development and routine use of established 3Rs methods.

The data presented here combines data from our annual researchfish® submission in conjunction with data from our portfolio, including the proportion of awards for each 'R' and the areas of science represented. Our portfolio encompasses all awards made through our response-mode funding schemes since 2004. This includes active and historic schemes but not awards made through the CRACK IT innovation programme. We have collected data via researchfish® annually since 2013 and in 2017 3Rs impacts were included as an additional question set. Some grant holders with awards that pre-date this have chosen to use researchfish®, where this data has been submitted it has been included in analysis, although the dataset is not complete.

The following section shows the NC3Rs portfolio as a whole and a breakdown of awards with data presented in this analysis.

Since 2004, over £48 million has been awarded to fund projects intended to replace the use of animals through NC3Rs response mode funding. A similar number of projects to reduce and refine the use of animals in research have been funded, with £15 million and £11 million committed respectively.

Portfolio summary by area of science

The NC3Rs funds a wide range of scientific areas each with the aim of replacing, refining or reducing the use of animals in research. Grants that do not fit these broad categories or have wider application are classified as other. 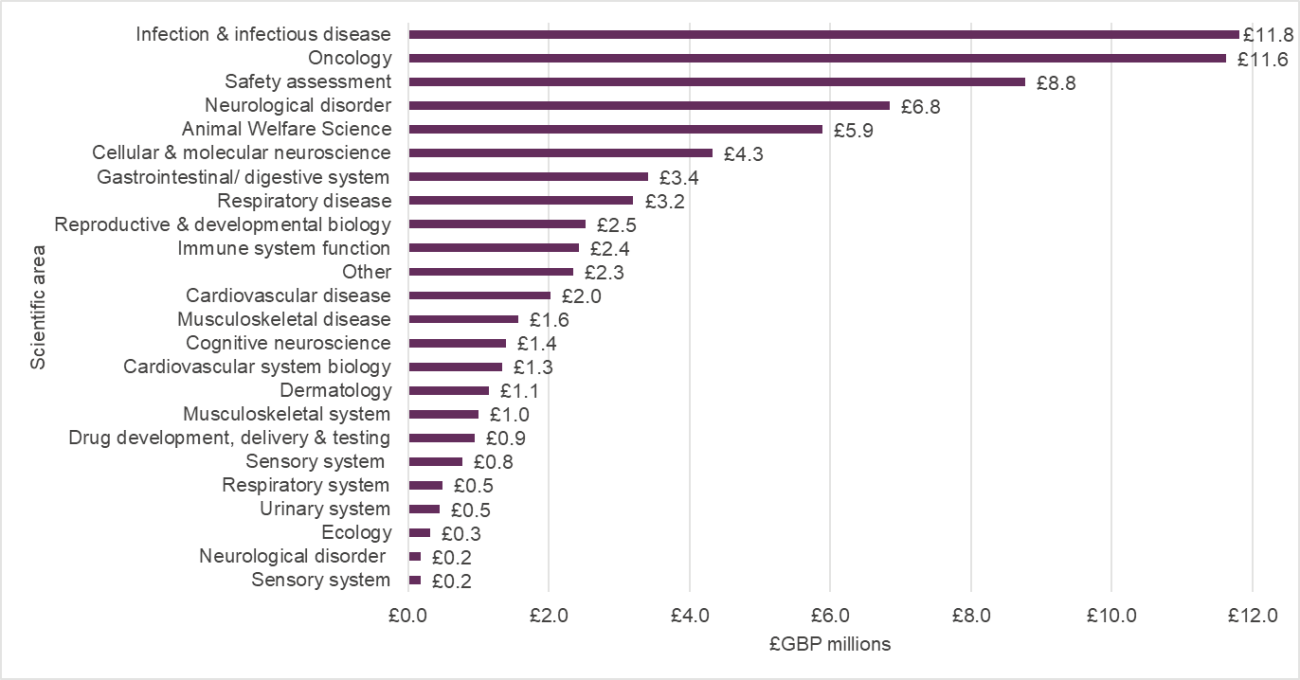 Our funding schemes aim to drive the development of 3Rs methods and accelerate their uptake by others in the research community by building confidence through their validation and application. The majority of awards in our portfolio focus on the development and validation of new methods, tools and technologies.

When the pipeline is weighted (i.e. a project focusing solely on development scores 1 in that category and 0 in validation and application whereas a grant focusing on all three stages would score 0.33 in each category) the stage most represented in the NC3Rs portfolio is validation.

Summary of grants submitting through researchfish®

The most recent researchfish® submission period ran from 1 February 2021 to 11 March 2021. The NC3Rs had 398 awards (excluding CRACK IT Challenges research contracts) on the researchfish® system, of these 261 were expected to submit in the 2021 submission period. The report contains submitted data from 391 grants from 324 grant holders – these include 32 Fellowships, 181 Research grants (including Project grants, Pilot Studies, Skills and Knowledge Transfer, Infrastructure to Impact, Strategic and Technologies to Tools awards) and 136 Studentships representing approximately £71 million of NC3Rs awarded grants.

The breakdown of submissions by researchfish® response code was as follows:

More information on response codes can be found on the researchfish website.

Each NC3Rs award is classified according to the 'R' it is aiming to impact, this is termed the Primary 'R'. It is also possible that during the lifetime of a grant, the research impacts another of the 'R's, for example if a refined technique improves reproducibility and less animals are required. In this example, the Primary 'R' would be refinement and the Secondary 'R' reduction. This section describes the 3Rs impacts reported by NC3Rs grant holders through researchfish®.

On average, it takes a grant holder approximately two years to report a 3Rs impact for the first time. The majority of grants that have not reported 3Rs impacts are active awards, with 20 of these grants starting in the 12 months before the submission period.

Over half of all NC3Rs awards that have submitted through researchfish® report an impact in their Primary 'R', this increases to over two-thirds of all awards when analysing only grants that have completed.

During the lifecycle of a project, an award may also achieve impact in another 'R' (the Secondary 'R') in addition to the Primary 'R'. This is more often reported by grant holders with projects targeting replacement and reduction as their Primary 'R'.

Through researchfish®, NC3Rs grant holders report where they have achieved a 3Rs impact. Impacts can be achieved within their own laboratory (local), or more widely in laboratories within the UK (national) or within the global research community (international).

The first 3Rs impact expected as a result of NC3Rs funding is within the grant holder’s laboratory (we define this as a local impact). Some projects may not have a 3Rs impact locally, either because the award has been recently made and it is too early to expect impacts to have arisen in the timeframe, or the grant holder does not use animals in their own research.

Over 60% of NC3Rs grant holders report their award has resulted in 3Rs impacts in their laboratory. This analysis includes grants at various stages of the grant lifecycle from those that have recently started to those that completed a number of years ago. On average, it takes just under two years for a local 3Rs impact to be first reported.

Developing new 3Rs methods that impact the project, or the research of others is key to achieving the NC3Rs mission. 64% of the research methods generated by NC3Rs grant holders are assays or reagents, in vitro models, cell lines or non-mammalian models.

The development of the 3Rs method and subsequent local impact in the researcher’s laboratory are likely to take place during the award but national and international impacts are more likely to occur outside the lifetime of the grant due to the time and investment required to fully develop, validate and disseminate a 3Rs model. The NC3Rs works closely with researchers to ensure 3Rs advances benefit others more widely across their institute and field, including providing the Skills and Knowledge Transfer award scheme to support dissemination.

A key part to ensuring a developed method achieves a 3Rs legacy, where impact is sustained beyond the term of the award, is the uptake and application of the method by other researchers. Our grant holders report 45% of research materials developed through NC3Rs funding have been shared with other researchers.

The majority of collaborations formed by grant holders as a result of NC3Rs funding are with academic or industrial partners, 85% of all collaborations were reported as active collaborations at the time of researchfish® submission. 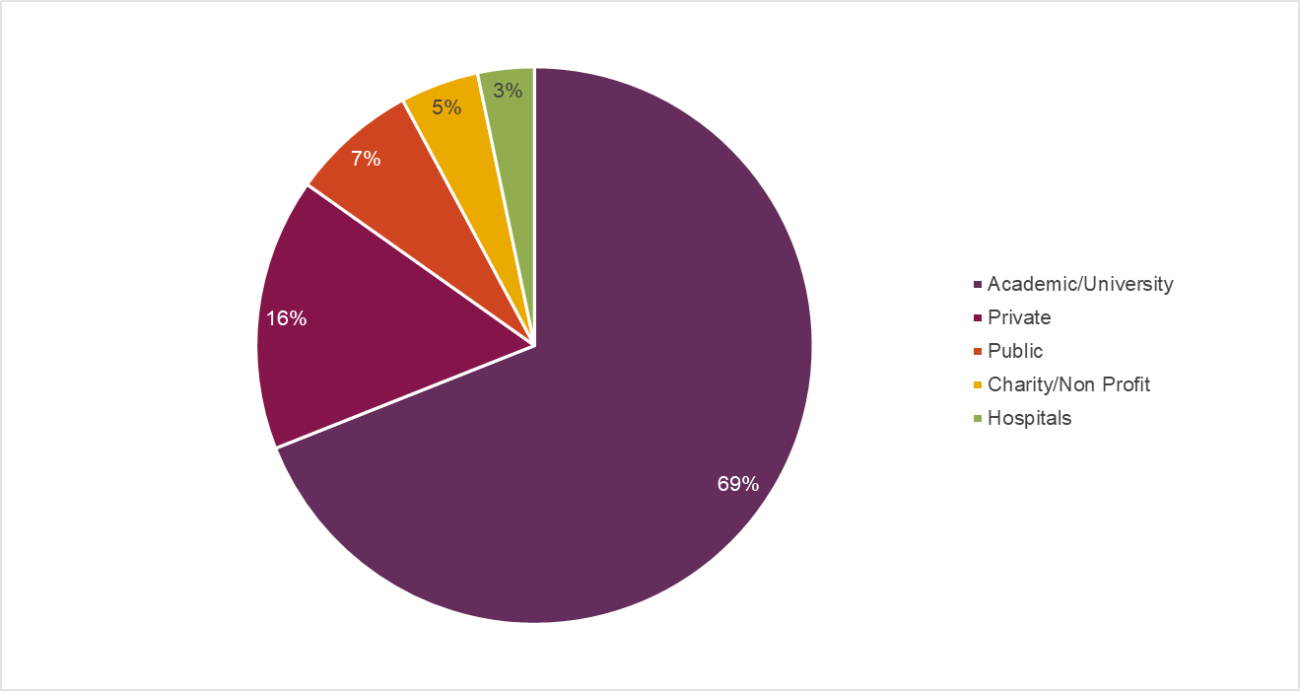 We encourage our grant holders to think actively about how to achieve a meaningful 3Rs impact. Publications are one element of dissemination and reporting the development, validation and application of 3Rs methods helps build confidence and acceptance in the wider research field. The analysis below highlights the publications reported by NC3Rs grant holders (including journal articles, book chapters, conference abstracts).

Time to publish from start of the grant

The average time taken for an NC3Rs grant holder to report a publication is three years after their grant begins.

The majority of articles published by NC3Rs grant holders are primary research papers. ‘Other’ includes papers such as conference proceedings published in a journal, news/views articles and editorials.

NC3Rs funding stimulates further funding for our grant holders, an important step in the uptake and legacy of an NC3Rs grant ensuring the continued use and impact of the developed method.

Time taken for instance of further funding to be reported 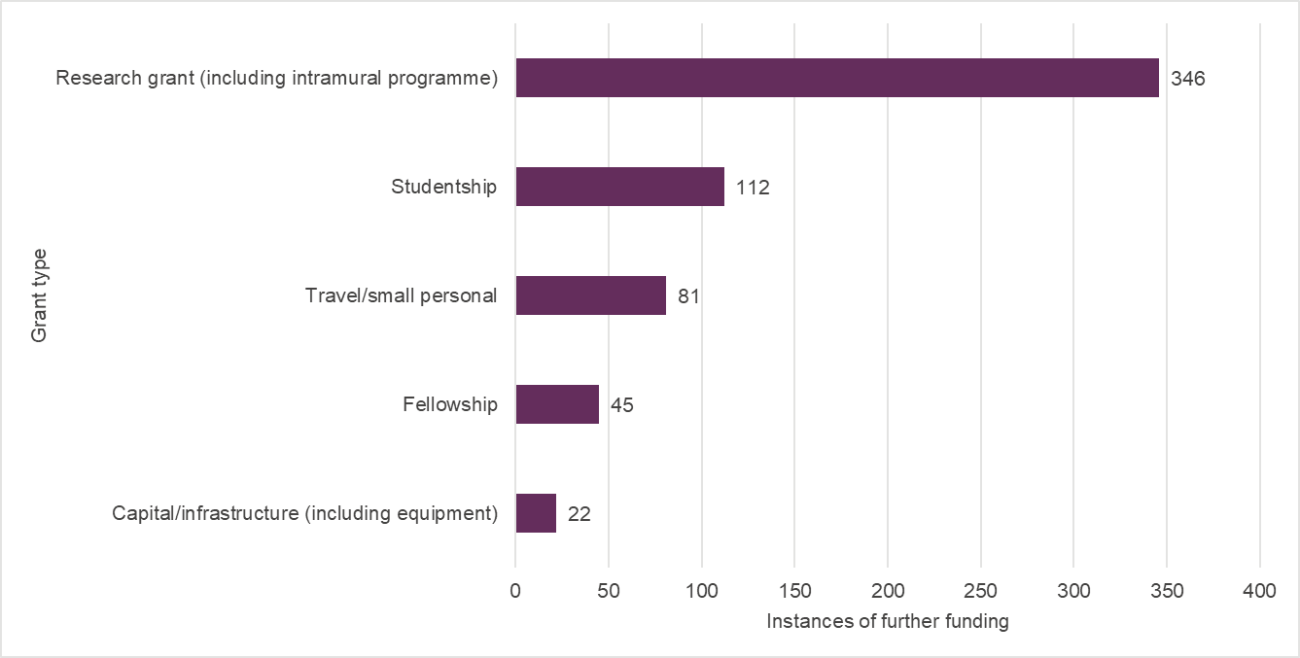 Our grant holders receive further funding from a variety of sectors outlined below. 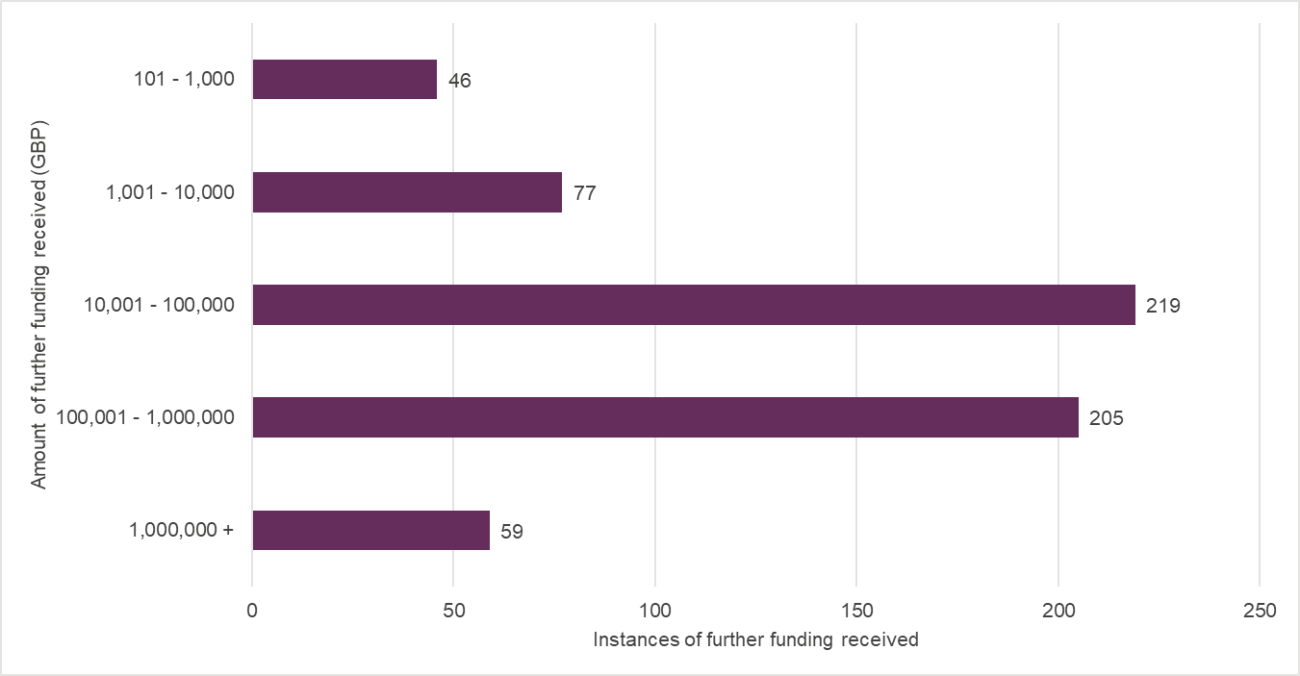 To date, five spin-out companies have been established as a result of NC3Rs response-mode funding schemes.

Dissemination of NC3Rs-funded research to stakeholders, particularly those who may use the method or work within policy, is key to maximising the 3Rs impacts of a 3Rs method, tool or technology. Engagement activities can include presentations, workshops, open days, school visits, and articles published in magazines, newsletters or on an online platform.

Influences on policies and practices can affect research, society or the economy. Over half of all policy influences reported by NC3Rs grant holders are directly influencing the training of other practitioners or researchers.

Talks and presentations are the most common engagement activity for NC3Rs grant holders followed by participating in activities and workshops.

42% of engagement activities reported by NC3Rs grant holders have an international reach. 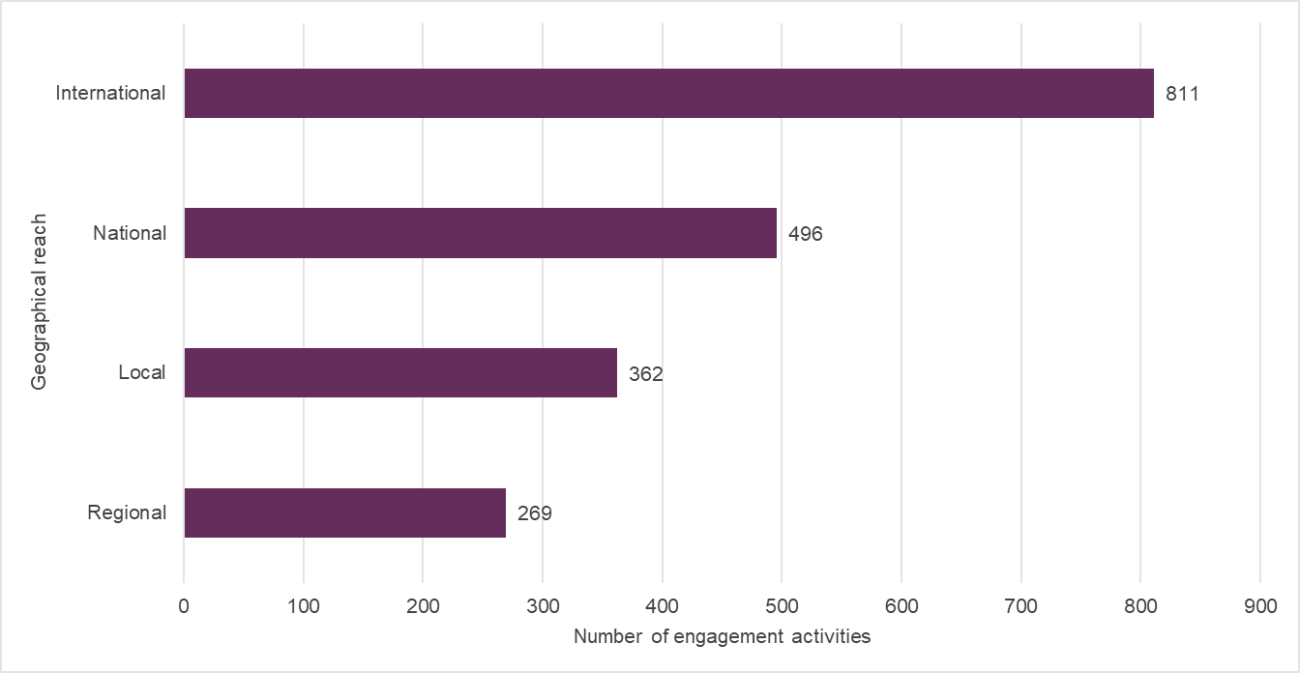 NC3Rs grant holders disseminate their research to a wide range of audiences, 60% of these are professional practitioners, the general public and postgraduate students. 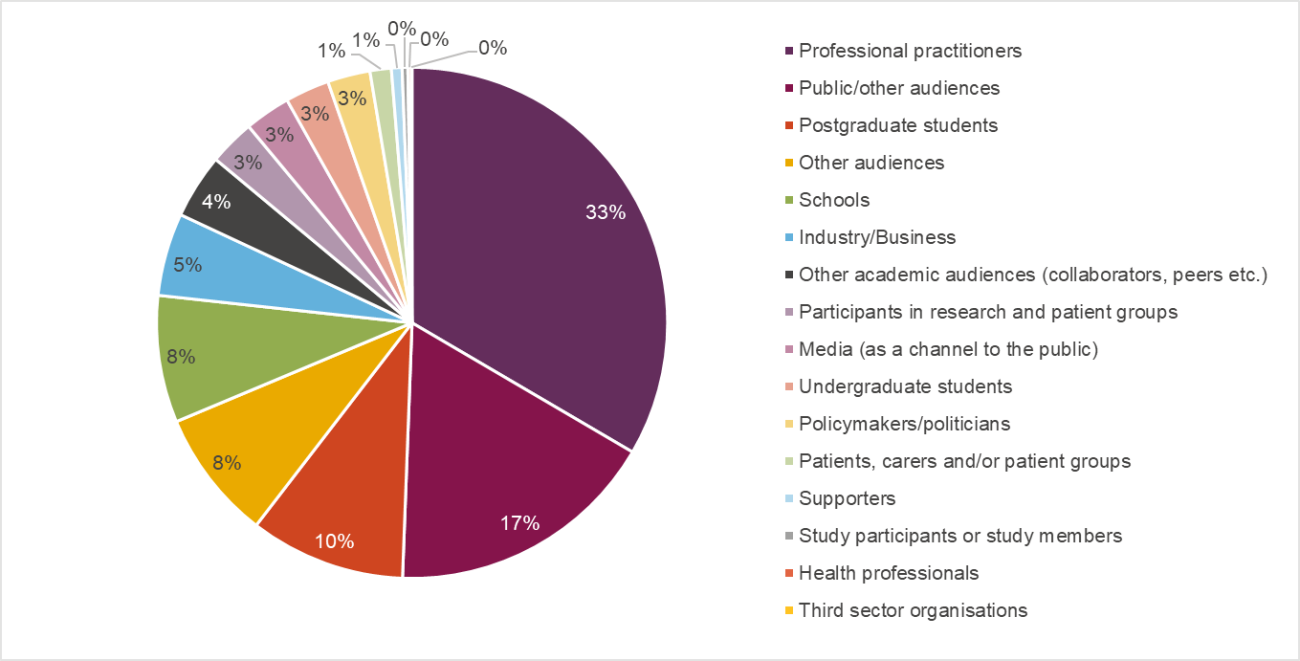 Out of 299 NC3Rs grant holders included in this analysis, 75 reported having been invited as a keynote speaker to a conference.

Where details about next destination are provided, 85% of people leaving NC3Rs support remain active in research in some capacity. 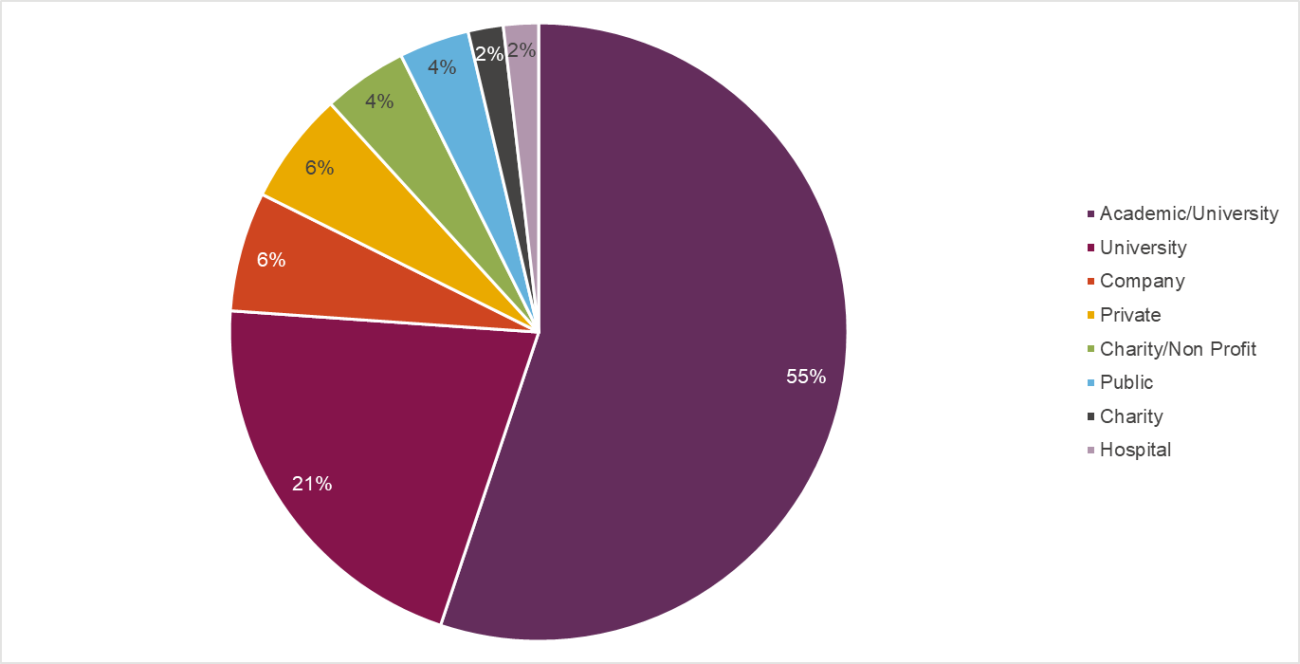 Applications to the NC3Rs response mode funding schemes are made using the Je-S system, where applicants may provide data on protected characteristics when setting up an account. Where this information has been provided by applicants, it has been used in this analysis. Data has been presented on Principal Investigators (PIs), Co-Investigators (Co-Is) and Fellowship (Fellows) applicants and awardees for the calendar year 2020. For our PhD Studentship scheme, data from the Je-S system is only collected for the Principal Investigator.

Where possible we have also used data from the Higher Education Statistics Agency (HESA) from the 2019/20 academic year to provide further context into the academic community and highlight where our data align or differ. This data was accessed on 18 November 2021.

Percentage of applicants by age

Percentage of applicants by disability

Disclosed disabilities are reported as between approximately 4% and 3% for PIs and Co-Is respectively. 5% of applicants disclosed a disability for the Training Fellowship scheme. Approximately 4% of the academic community disclose a disability in the HESA data.

Percentage of applicants by ethnicity

Ethnic minorities make up approximately 12%, 7% and 26% of applicants for NC3Rs grants as PIs, Co-Is and Fellows respectively. HESA data show that 16% of the academic community are part of an ethnic minority.

The number of applicants (PIs, Co-Is and Fellows) from ethnic minorities applying for NC3Rs awards has remained relatively constant over the last five years.

Percentage of applicants by gender

Applicants identifying as female comprised 40%, 42% and 58% of PIs, Co-Is and Fellows respectively for NC3Rs grants. Approximately 46% of the academic community identify as female according to data from HESA.

The percentage of female applicants (PIs, Co-Is and Fellows) to the NC3Rs has increased by approximately 6% in the last five years.

Comparison of award rates by gender and ethnicity

researchfish® is an online platform used to gather outcomes and impacts arising from research. Grant holders report outputs into researchfish® that have resulted from, or are directly linked to, their NC3Rs awards. researchfish® is open to researchers all year round, but there is an annual submission period when researchers are asked to confirm that their information is accurate and up to date. All Grant holders are required to submit a report during the submission period for each year of their grant and typically for five years following the grant’s completion.

All averages have been calculated as the mean of data between 2013 and 2020 only as this is the period the NC3Rs have a complete set of reported researchfish® data. The data submitted via researchfish® is ‘cleaned’ by the NC3Rs team liaising with grant holders where necessary to check for accuracy, completeness and avoid duplication of data.

Each graph includes an ‘n’ number, which indicates the total sample presented in the graph. Differences between header statements (in highlighted boxes) and graph ‘n’ numbers are due to incomplete data for some of the categories of information presented in graphs. 0% indicates a value less than 1% that has been rounded down during analysis.

If you have any questions, comments or feedback on any aspect of this report please contact the NC3Rs funding team.