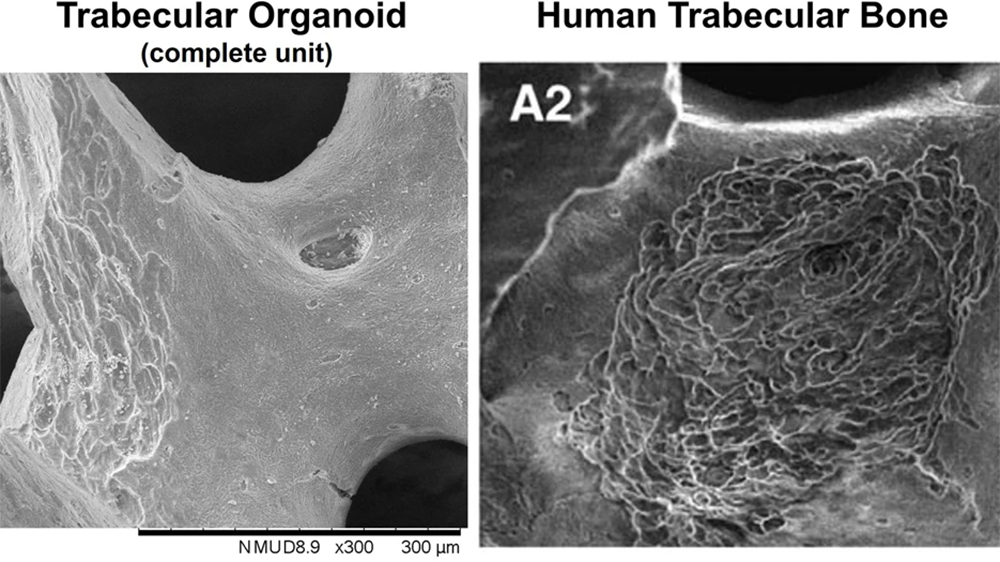 Studying bone degeneration is complex. Bone is a dynamic organ that responds to stimuli such as mechanical loading. Bone mineral is continually being deposited and removed and any imbalance in the underlying cellular processes can result in reduced bone mass and conditions such as osteoporosis.  Bone loss can be induced in animals by hormonal intervention, immobilisation by surgically resecting nerves, tendons or the spinal cord, or removing the normal mechanical stresses on the bone. The latter is referred to as disuse and is typically modelled in rodents by suspending the animal by the tail, preventing the hindlimbs from being used over periods of days. These models are often associated with significant suffering but are not always representative of pathological states and are often too complex to investigate early phase bone formation.

The new study builds on Alex’s NC3Rs-funded PhD, supervised by Dr Liam Grover at the University of Birmingham, where she developed an in vitro system using fibrin gels to encapsulate osteoblasts. When provided with a continuous source of calcium phosphate and osteogenic factors, the cells deposited ordered matrix that resembles mature bone. Alex has subsequently further adapted the system to develop a trabecular bone organoid or “micro-organ prototype”, which can be grown in various perfused bioreactors.

In the study, human osteoblasts, osteoclasts or a mixture of the two cell types were seeded using an inverted drop culture method on individual bovine trabecular fragments used for surgical repair. When cultured in the presence of pro-osteoblastic or pro-osteoclastic factors, the cells matured and began depositing or reabsorbing bone. This allowed Alex to examine cellular processes and identify resorption patterns in the organoids that resembled those in human trabecular bone.

With the new miniaturised system, Alex was able to use a specialised bioreactor to simulate microgravity, recapitulating bone disuse in vitro. The trabecular surfaces of the organoids were altered as a result and showed a longitudinally extended resorption morphology compared to static models. This resembles a major type of resorption pattern seen in trabecula of human femoral heads, which has the potential to weaken the bone. The precise cause of this pattern is unknown and the organoids provide a model system for further investigation.

The trabecular organoids can also be seeded into human fibrin micro-domes to adapt the model at the micron scale and mimic the structure and factors present in an in vivo environment, providing a further level of complexity to the structures. Alex compared seeding the organoids in Matrigel, the traditional matrix used for organoid generation, observing differences in cellular behavior, with the organoids embedded in Matrigel proliferating atypically similarly to that seen in early cancer development.

The organoid system can also be applied for further analyses. The construct diameter has been designed to match a 96-well plate allowing high-throughput assays used in pharmaceutical development. It is also amenable to various analyses commonly used to assess bone formation, including micro-CT, colorimetric or fluorometric detection or analysis with polarised light.

Alex has written a “Behind the paper” post for npj Microgravity where she describes the method and its applications in further detail. If you are interested in applying this model in your research, you can contact Alex at a.iordachescu@bham.ac.uk.