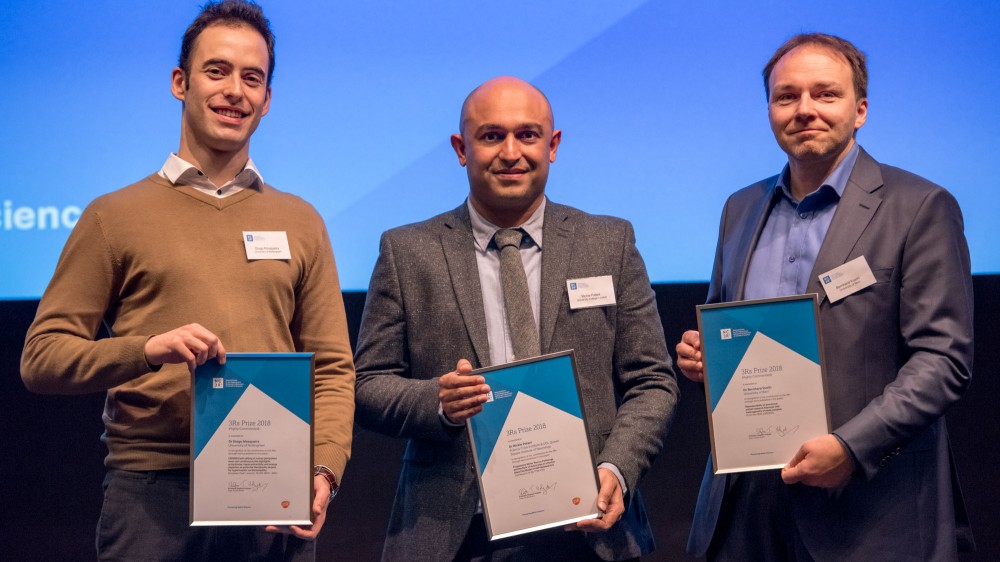 A paper describing the use of patient-derived stem cells to study motor neuron disease has been recognised with the annual £30k prize awarded by the NC3Rs and sponsored by GSK.

Motor neuron disease also known as amyotrophic lateral sclerosis (ALS) affects around 5,000 adults a year in the UK and is characterised by a progressive degeneration of motor neurons in the brain and spinal cord that ultimately leads to death. Around 10% of cases are familial.

Research into ALS has relied on the use of animal models particularly mice, with around 250 papers a year reporting in vivo studies. While this research has been important for understanding disease biology, the models are often poorly characterised, do not recapitulate the sporadic form of the disease, and the disease phenotype can differ between mice and humans. Studies involve significant animal welfare concerns as the mice lose their mobility. Translation of findings from animal studies have not resulted in new drugs and riluzole remains the only available treatment.

The award was presented at a ceremony in London to lead senior author Dr Rickie Patani from the Francis Crick Institute and UCL Queen Square Institute of Neurology. The paper, published in Cell Reports, describes the results of a decade-long, multidisciplinary collaboration between seven institutions*.

The ALS iPSCs have a number of scientific benefits over the mouse models, which importantly include the ability to reflect the genetic heterogeneity of patients, investigate sporadic forms of the disease (which represent 90% of the cases), and allow early molecular events to be studied. The cells provide a tool to better understand the disease and to screen potential therapeutics, allowing some studies which are currently dependent on mouse models to be carried out in vitro. The robust iPSC differentiation protocols developed by the team have already enabled three groups in the UK to shift some of their research from animal models.

Dr Rickie Patani said: “I’m honoured and grateful to receive this award for our efforts to develop human induced pluripotent stem cell models of neurodegeneration. The lead first author of this work was my first ever PhD student, Dr Claire Hall, who helped to build on prior insights made during my own PhD and postdoctoral research. A decade after this work was started, I’m delighted to see that our models are now being widely adopted across several laboratories at UCL Queen Square ION, the Francis Crick Institute and beyond. I’d like to thank these colleagues for their confidence in our iPSC models, research vision and for their shared commitment to the 3Rs. Crucially, this model will serve to reduce, and in some cases replace, the use of animal models. The overarching vision of my research group is to use these motor neuron and astrocyte models to understand how abnormal RNA transcript structure leads to deregulation of key proteins, and how this in turn causes ALS.”

Professor Stephen Holgate CBE, Chairman of the NC3Rs Board and Prize Panel said “We have known for some time that iPSCs could be disruptive in biomedical research. This excellent paper demonstrates how this reality is now being achieved not only with potential benefits for patients but also for replacing the use of animals in studies that raise serious welfare concerns.”

Dr Martin Bayliss, Senior Fellow, Pharma R&D, GSK, said: “At GSK we are committed to the 3Rs and applying these principles across all our drug discovery and development activities, and are constantly seeking new models and approaches that allow us to effectively replace animal studies. We are proud to support the international 3R’s prize, which recognises important work in this area, identifying a method which could have significant animal welfare benefits.”

The Prize Panel recognised two entries as highly commended because of the quality of the work and 3Rs impacts. They will receive an award of £5k each.

Dr Diogo Mosqueira from the University of Nottingham, for work on developing and validating a human stem cell-based model of cardiomyopathy using CRISPR/Cas9 editing.

Dr Bernhard Voelkl from the University of Bern, for work demonstrating that performing multi-laboratory studies can produce more accurate and reproducible results than studies in a single laboratory, without the need to use more animals.

Funded by the European Research Council and the Swiss Food Safety and Veterinary Office.