A paper reporting the development of a new automated home cage monitoring system for mice has been published this month in the journal Frontiers in Behavioural Neuroscience. The development of the system was funded by the NC3Rs through its open innovation programme CRACK IT Challenges and provides for the first time the kit to automate the recording and analysis of the activity and behaviour of individual mice housed socially in their home cage.

Monitoring changes in behaviour, including activity is key to many animal experiments including the phenotyping of genetically altered mice used in studies to try to understand a range of human disorders of the central nervous system from Huntington’s disease to autism. In most cases behavioural analyses involve removing mice from their home cage and cage mates and putting them in novel and unfamiliar environments where they undergo a battery of tests for various lengths of time. The tests are often subjective and there can be significant data variability due to factors such as the presence of the experimenter.

Mice are social animals that are typically housed in the laboratory in small groups established at weaning. Single housing, disruption to their social hierarchy and a change in environment can be highly stressful for mice and can lead to behavioural and physiological changes which compromise their well-being and the studies in which they are being used. A system that allows automated monitoring of the behaviour of group housed mice in their home cage would offer major animal welfare as well as scientific benefits.

The paper describes the development and characterisation of the Home Cage Analysis system which is able to longitudinally and non-invasively track individual mice in group housed environments without compromising animal welfare. The system is compatible with a normal IVC home cage and is able to distinguish and capture basal motor activity. An RFID reader baseplate with antennae in specific positions beneath the home cage provides spatial monitoring of location and activity detection. In the study an infrared camera is added on the side of the cage to record video footage for validation of the system and the future development of automated behaviour recognition.

Dr Sara Wells, Director of the Mary Lyon Centre at MRC Harwell and one of the paper’s authors said: The Home Cage Analysis system has the potential to transform how we characterise the behavioural phenotypes of genetically altered mice through the level and clarity of the data it provides. The fact that we can do this without disturbing the mice by group housing in the genuine home cage on a standard IVC rack is unique and an enormous advantage of the system.” 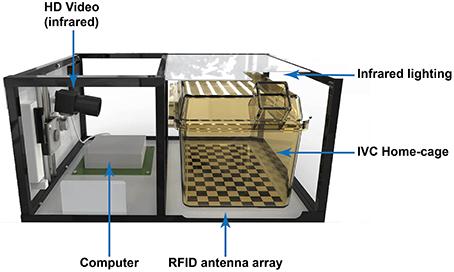 Illustration of the Home Cage Analysis system with the major components highlighted.

In a proof-of-principle study the system has been used to investigate the activity of three commonly used inbred strains providing previously unknown insights into their social interactions, behaviour during the nocturnal period and differences in the activity of individually and group housed mice. It has also revealed new information on the effects of genetic background on individual and group behaviour which could influence the future interpretation of studies using these mice. Because of the quality of the data obtained the system has the potential to improve studies of disorders that involve social or progressive motor impairments. Importantly, the system also allows for suffering to be minimised by maintaining stable groups of mice in the cages they are reared and housed in and by monitoring behaviour without isolation or disturbance. There is also the potential to use the system to identify early humane endpoints and to explore potential refinements such as new cage enrichments.

The Home Cage Analysis system was developed by the Edinburgh-based company Actual Analytics through an award of £500k from the NC3Rs for the Rodent Little Brother CRACK IT Challenge. The Challenge was sponsored by MRC Harwell who provided expertise in mouse behaviour and experimental design as well as contributing to data annotation. Other home cage behaviours such as feeding, drinking and rearing are currently being integrated into the system as part of the collaboration.

The system is available to purchase from Actual Analytics.