When a mouse strain is generated or imported into an animal facility the genotype and background strain should be verified. Detailed information about how the genetically altered (GA) strain was created needs to be recorded and stored (e.g. background strain, gene-editing technique used to create the strain, copy number for insertions or precise deletion/mutation, details of genotyping and sequencing used and the results). Having enough information about how a strain was created increases the usefulness of the strain and the reliability of data from experiments using that strain.

Single nucleotide polymorphism assays (SNP panels) can be used to confirm a background strain, Ideally, the background strain should be confirmed upon arrival of the strain at your facility and periodically when maintaining the colony.

Any new strain either generated within, or imported into, an animal facility should be archived as soon as possible. This acts as a contingency plan protecting the strain from complete loss in extreme circumstances (e.g. pandemic, disaster, or sudden illness of key staff) and ensures greater reproducibility of data if acquired from animals derived from archived stock (i.e. there is limited genetic drift, because there has been less breeding). In most cases, freezing sperm from males carrying the genetic modification is sufficient. In specific cases, freezing embryos may be more appropriate (e.g. some homozygous strains, wild bred/caught strains). See Scenario 8 and Archiving Best Practice for further information about archiving best practice. It is important to keep detailed records of frozen tissues/strains, for both local archiving and repositories.

Controlling the integrity of the strain

When either rederiving a strain or building up a colony from a smaller number of breeding animals, how animals are bred should be carefully controlled, to maintain the integrity of the background strain, reducing future problems. To obtain reproducible and biologically relevant data, specific factors to consider include potential variation of the genetic background over the course of different experiments, whether fecund breeding stock is of the correct and consistent genotype and how these factors will impact on the final experimental design.

Keep comprehensive records of the strain to facilitate optimal colony maintenance. Information recorded for each strain should include:

The minimal number of stock animals required to maintain a colony depends on both the strain itself (i.e. how well it breeds, what the reproductive lifecycle is etc, which can be affected by both the background strain and the specific genetic modifications), as well as the purpose of the stock. If the stock is being kept to maintain a live colony, more animals will be required than if the stock is being bred for archiving purposes (see the Archiving Best Practice for more information on archiving strains). Minimal experimental stock numbers are highly dependent on the requirements of the specific experiment, for example, whether heterozygous or homozygous animals are needed, and the sample size required.

It is important to consider how often each strain is used and whether it is more appropriate to archive the strain and rederive it in the future, or to maintain a breeding colony.

Where the strain will not be used for longer than six months, it is strongly recommended to archive the strain and rederive it in the future (see Scenario 1). This can reduce both genetic drift and animal use.

If maintaining a strain as a breeding colony, select the most appropriate breeding strategy for the purpose of the colony. For example, when a manuscript is under review, and a colony is being maintained in the event that reviewers request further experiments, an intermittent breeding strategy should be used to avoid animals being wasted (see Worked example of intermittent breeding).

Reproductive lifecycle of the strain

To effectively maintain a colony, it is important to understand the reproductive lifecycle of the strain, including strain-specific optimal breeding age and fecundity. Each wild-type or GA strain has a different optimal breeding age which will inform the appropriate breeding strategies – see Further information for relevant resources from The Jackson Laboratory.

Genetic drift happens in every generation and cannot be stopped. Repeated breeding within a closed colony will lead to genetic drift, with potential loss or gain of phenotypes due to accumulation of background mutations. If allowed to drift unchecked, the colony will become distinct from the initial inbred strain it was generated on, potentially causing problems finding appropriate control animals. Additionally, the colony will continue to drift over time, accumulating more mutations and reducing the reproducibility of experiments carried out on different generations of mice.

If allowed to drift unchecked, the colony will become distinct from the initial inbred strain it was generated on...accumulating more mutations and reducing the reproducibility of experiments.

Drift can be slowed by crossing GA mice to mice from a controlled inbred strain (an inbred strain that is restocked from archived embryos every five to ten generations). This is done routinely by commercial suppliers. Keeping a GA strain as a backcross to a controlled inbred strain is the best way of reducing genetic drift. In cases where this is not possible, for example when a colony needs to be kept as homozygotes, it is important to cross it back to the appropriate inbred strain approximately every three to five generations, before intercrossing again to produce homozygotes for further breeding. If this is a very complex colony with multiple alleles, it can be worth archiving stock embryos at earlier generations.

Further information on colony management from The Jackson Laboratory:

Sharing and archiving of GA mice 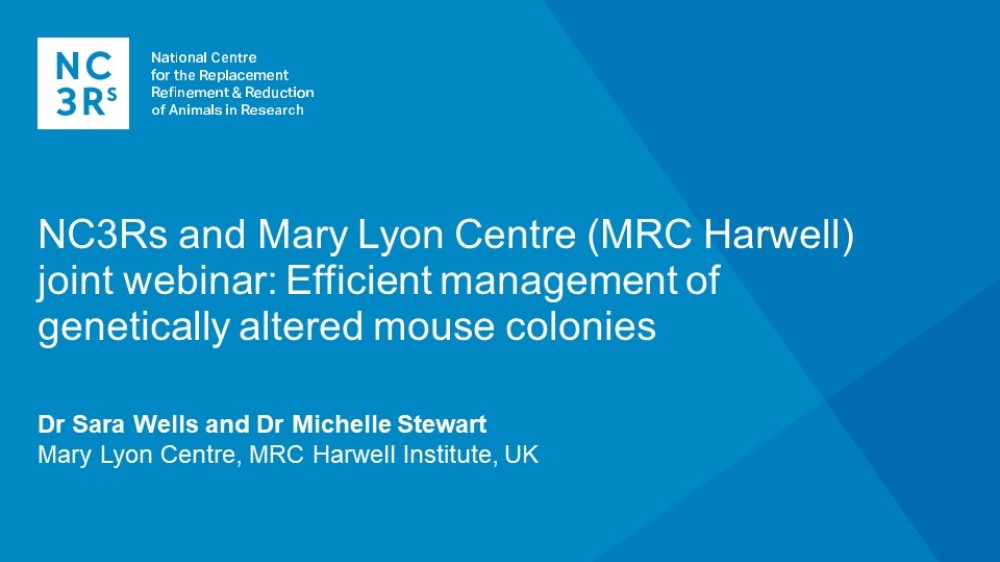