Behavioural assessment of wellness and pain in macaques 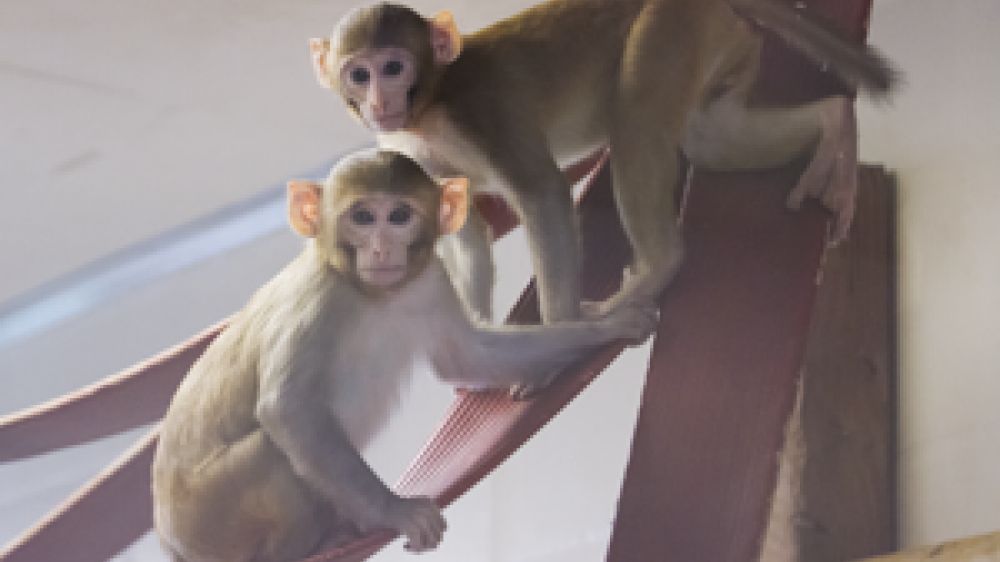 A new observational study will help to improve the welfare of macaques used in research after identifying behavioural indicators of wellness and pain.

The NC3Rs-funded research is published this week in the journal ALTEX.

Accurate, efficient methods of assessing the welfare of animals used in research are vital to refining procedures. Identifying pain-specific responses is essential for alleviating any pain experienced by the animals, and in minimising the negative impact on their welfare.

Previous published research has indicated that facial expressions (grimace scales) can be used to quantify levels of pain experienced by individuals of various species, including rats, mice and rabbits. However, comparable means of assessing pain have yet to be developed for non-human primates, such as macaques and marmosets.

Researchers from the Universities of Stirling and Newcastle observed 36 rhesus macaques undergoing surgical procedures as part of separate neuroscience projects. No procedures were performed for the purposes of the study and no veterinary care was delayed or omitted. The monkeys were observed prior to surgery, after recovery from anaesthesia, and both before and after the administration of additional analgesia the following day. This enabled the team to record facial and behavioural changes in response to procedures and pain relief, and evaluate potential indicators of wellness and pain.

Wellness indicators were behaviours related to activity and alertness, such as time spent off the ground and cage manipulation, and these were reduced following a procedure. Other behaviours increased, such as half-closed eyes, leaning of the head and shaking of the body, but these did not appear to be pain-specific responses as they were not reduced by additional analgesia on the day following a procedure.

Although all monkeys received standard pain management throughout the observations, three potential pain indicators were identified: lip tightening and chewing were most prevalent the day following a procedure and prior to additional pain-relief, while running was lowest during this period.

Project leader, Dr Sarah Vick, University of Stirling said: “Identifying reliable indicators of pain and wellness in non-human primates is challenging. In our study, there were a number of factors – including age, sex and type of procedure – which also influenced behaviour. This research contributes to our understanding of macaque welfare and provides a solid foundation for the development of improved evaluation tools, and ultimately improvements in welfare.”