First out of the gate(way): a method for studying Alzheimer’s in vitro 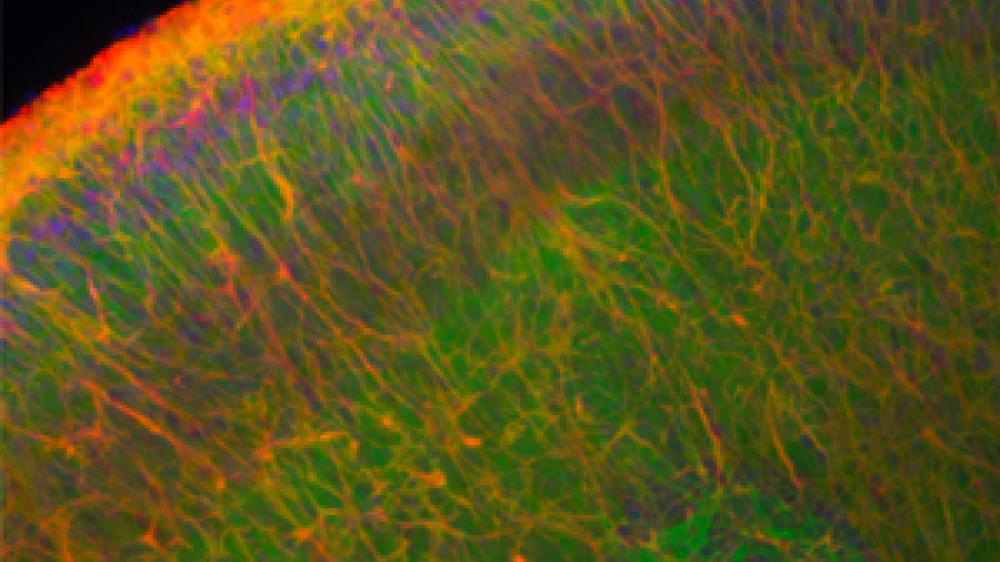 To mark the launch of our F1000Research gateway, we are highlighting the researchers behind the first four papers published on the new platform.

In this blog post, we profile Dr Cara Croft and Dr Wendy Noble, whose paper explores a methodology for preparing brain slice cultures from transgenic mice in order to study Alzheimer’s disease in vitro.

The numbers are stark: 850,000 people are estimated to be living with dementia in the UK, a figure that is expected to more than double by 2050, while 24.6 million people have a family member or close friend who is living with the condition. Currently, dementia is the leading cause of death in the UK and is the only condition among the top ten causes of death in the UK that cannot be prevented, cured or slowed.

As the most common cause of dementia, accounting for two-thirds of all cases in the UK, Alzheimer’s disease represents a huge challenge in terms of both health and social care. Accordingly, considerable research efforts are being focused on uncovering why and how Alzheimer’s disease and other dementias develop.

Using the 3Rs to drive innovation in Alzheimer’s research

Because neurodegenerative diseases often develop as we age, much dementia research involves ageing transgenic rodents until they develop severe symptoms, sometimes using invasive procedures to measure the related changes in their brains. In addition to the welfare concerns these studies raise, they can be both costly and time-consuming to run. In vitro models of Alzheimer’s that rely on the use of cell lines can be useful in some contexts, but they cannot fully replicate the complex structures within the brain or be maintained for extended periods of time in culture. 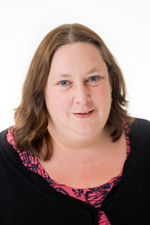 Dr Wendy Noble is a Reader at Kings College London, where she researches the molecular mechanisms underlying Alzheimer’s disease. Her work aims to establish which processes play the biggest role in neurodegeneration, so new treatments can be most effectively targeted. She points out, it has become almost second nature for neuroscience projects to be built around mammalian cell culture systems or in vivo rodent experimentation, particularly as these types of studies are often expected by grant funders and publishers.

In 2011, the NC3Rs awarded Dr Noble and her co-investigator Professor Diane Hanger (also of Kings College London) a Studentship award, which funded Dr Cara Croft’s PhD. The aim of the project was to characterise and validate an alternative in vitro model of Alzheimer’s that could address the scientific disadvantages of existing models, as well as using fewer animals and avoiding some of the welfare issues associated with rodent ageing studies.

This alternative model involves obtaining organotypic brain slice cultures from transgenic mouse pups. The brain slices are aged in vitro, meaning they retain a diversity of neural cell types as well their functional and anatomical connectivity while avoiding the need to age mice until they develop harmful phenotypes. The brain slices demonstrate the same molecular features of Alzheimer’s as observed in ageing studies, including the accumulation of tau and amyloid beta proteins, thought to be key factors in Alzheimer’s pathogenesis. 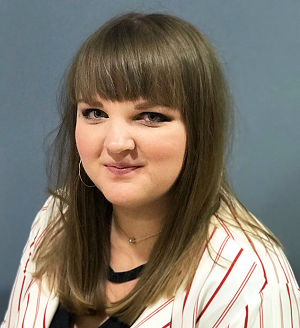 Each mouse brain can yield up to 36 slices, which can be maintained for up to six months in culture, meaning fewer mice are needed for studies. Different therapies or parameters can be assessed simultaneously in a single brain via separate slice cultures, reducing experimental variability. Because disease phenotypes are accelerated in brain slice culture models, data that would take 12 months to obtain in an ageing study can be obtained in just one month in vitro.

To validate the model for use in drug discovery, the team investigated the effects of three therapeutic agents on brain slices and compared these effects to those found in aged transgenic mice. They found that the brain slices recapitulated the in vivo findings and revealed some additional effects, meaning they could replace ageing studies in some instances, such as drug screening or dose range finding studies.

Publishing on the new NC3Rs gateway

We invited Drs Croft and Noble to submit a method article describing this work to our F1000Research gateway, to be published upon the gateway’s launch. The article subsequently became the first on the gateway to pass peer review and an updated version was published a month later.

Through this process Dr Noble particularly valued the opportunity to clarify important points, ensuring our message is clear to readers. She feels the platform can offer specific benefits to researchers whose work incorporates the 3Rs: since F1000Research publications are entirely open access, our methods can be widely viewed and extended to other fields of research. Experts can also comment publicly on the 3Rs aspects of our work, which we hope is useful to others in the field as well as regulatory bodies and ethics committees. Each paper on the gateway features a ‘Research highlights’ box, giving readers a quick overview of the most important scientific, practical and 3Rs benefits, as well as current and potential applications.

The model described in the paper is now being used by a number of laboratories within King’s College London to study Alzheimer’s and other neurodegenerative diseases, exploring the relationship between different brain cells, the progression of brain lesions, and the effectiveness of potential new treatments. The gateway’s open access model and emphasis on publishing the full details of research removes some of the barriers to further uptake, meaning future research partnerships will be easier to establish. 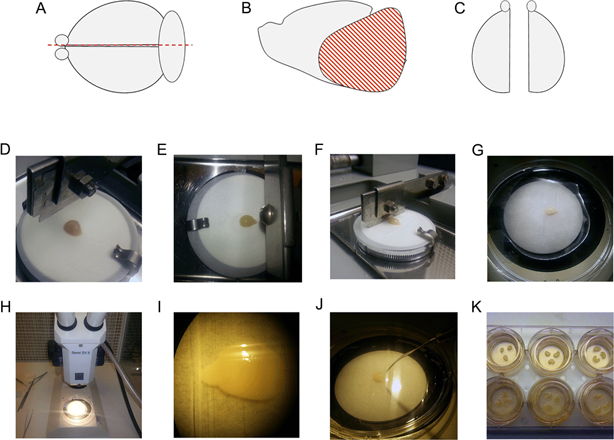 Dr Noble chose to apply for a PhD Studentship award from the NC3Rs because she felt it was an ideal opportunity for us to dedicate an entire project to this model, as a valuable proof of concept study for the dementia research community. She emphasises, it was important to us that our PhD student would be exposed to the NC3Rs ethos and carry this knowledge with them in their future scientific career.

Dr Croft was also keen to tackle a project that involved developing new models while implementing the 3Rs, having begun working on the long-term culture of brain slices from transgenic mice during her MSc at the University of Manchester. I had always wanted to work in this field, and felt I could bring the skills I already had to the project and develop them further with new techniques. I was also drawn by the reputation Drs Wendy Noble and Diane Hanger had in the UK Alzheimer’s research community. Throughout the project I had excellent mentorship and guidance from both of my PhD supervisors. I was able to thoroughly develop my technical skillset as well as collaborate with other PhD students and mentor undergraduate students in Dr Noble’s laboratory.

A successful PhD isn’t just about the research, and the NC3Rs encourages its funded students to get involved in public engagement, events and other activities. As well as our annual Summer School and other NC3Rs events, Dr Croft had the opportunity to attend the 2015 SET for BRITAIN competition at the Houses of Parliament, where she presented her work to a range of scientists and politicians. She showcased her work at a number of international conferences prior to its publication, and was also able to widen its reach through training other scientists in academia and industry to prepare brain slice cultures themselves. 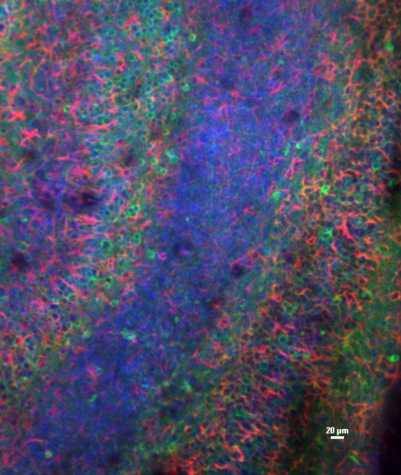 A brain slice culture under the microscope.

Following her PhD, Dr Croft took up a postdoctoral position at the University of Florida. She was recently awarded an independent research fellowship by the Brightfocus Foundation to continue studying Alzheimer’s and other neurodegenerative diseases via interdisciplinary projects. These include work utilising the model she developed during her PhD, complemented by recombinant adeno-associated viruses, which can deliver any gene to any type of cell within a brain slice culture. As well as avoiding the need to breed transgenic mice, this method allows for greater flexibility than in vivo studies, including the ability to study multiple genetic mutations simultaneously.

We chose to feature this paper as one of the first on our gateway because of its clear focus on using the 3Rs as a framework for better science. It also demonstrates how our PhD Studentships support the next generation of 3Rs advocates, driving innovation in both the short and long term. This all translates, not just into excellent science, but also into hope that effective treatments for Alzheimer’s and other similarly devastating diseases might soon exist.

The NC3Rs gateway, hosted by F1000Research, is an open access platform where NC3Rs grant holders can publish the details of their research in full and highlight its 3Rs impact. You can find it at f1000research.com/nc3rs.

Visit F1000Research’s blog to read their blog post featuring a conversation between Dr Croft, Dr Noble and Dr Claire Durrant, one of the paper’s referees. In it they discuss the gateway and how it facilitates collaboration through the open peer review process.