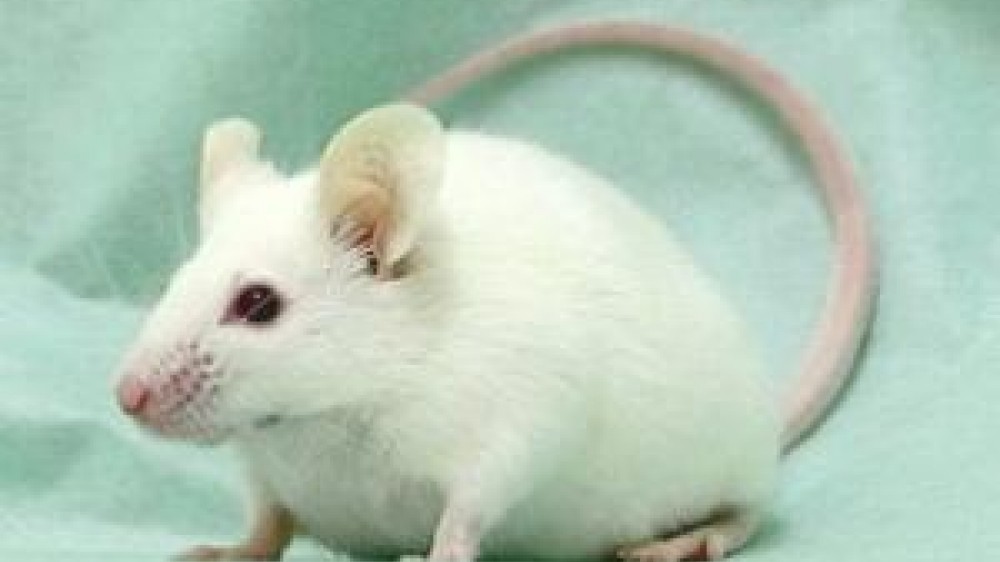 A study recently published in Disease Models & Mechanisms describes a new approach for inducing stroke in mice that reduces variability in the experimental model.

The work, funded by an NC3Rs pilot study grant to researchers at the University of Leicester, offers an opportunity to reduce the number of animals used in stroke research.

Stroke is most often caused by the blocking of blood vessels supplying blood to the brain (ischaemic stroke). Research into stroke interventions relies on the use of rodent models, which have a poor record of translating into clinically effective treatments and can cause significant suffering to the animals used.

The most frequently used rodent model of ischemic stroke involves temporarily blocking a major artery in the brain (middle cerebral artery, MCA, see image). As in the human situation, blockage of the artery causes a region of damage (lesion) in the brain. The size of the damage (lesion volume) is influenced by how quickly and effectively blood flow returns to the area after the blockage is removed (a process known as reperfusion). 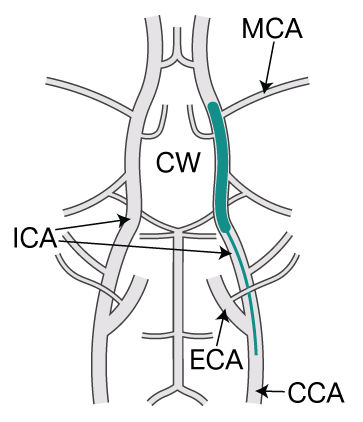 Traditionally, to block the MCA and cause an experimental stroke in a mouse model, an incision is made in an upstream vessel (external carotid artery, ECA, or common carotid artery, CCA) and a nylon filament (in green) is inserted into the artery to cause a temporary blockage.

After the nylon filament is removed, the vessel containing the incision is permanently tied off, preventing re-establishment of blood flow through the internal carotid artery (ICA) and reperfusion of the area happens via alternative blood vessels (a circular connection of arteries called the Circle of Willis, CW).

The major limitation of the traditional approach is the high variability in the outcome of the procedure; even though standardised surgical protocols are used, the lesion volumes are highly variable between animals (including some animals with no lesions), leading to large standard deviations and as a consequence the requirement to use large numbers of mice to achieve biologically and statistically relevant results.

Since lesion volume depends on reperfusion through the arteries, the team led by Dr Claire Gibson questioned whether the variability seen in the model is due to differences in the anatomy of blood vessels in the brain, especially since the Circle of Willis has high anatomical variability, particularly in the C57Bl/6 mouse strain typically used in experimental stroke studies.

The team modified the experimental protocol so that the incisions made in the vessels during surgery are repaired with a tissue pad, instead of the vessel being permanently tied off. This means that reperfusion can also occur via these vessels and is no longer solely reliant upon the variable Circle of Willis. This change enhanced the blood flow in the brain after the stroke and reduced the lesion volume variability within the groups.

By modifying the traditional protocol, the researchers generated a procedure where the outcomes were more consistent among animals. This allowed the team to use fewer animals to detect the effect of an intervention with the same degree of confidence (35 animals instead of 58 using the traditional approach).

In addition, the inclusion of preclinical MRI analysis allows longitudinal, within animal, studies to be conducted increasing the amount of data obtained from an individual animal.

The group have recently been awarded an NC3Rs Skills and Knowledge Transfer Grant which aims to help dissemination of this approach to the wider stroke community.  Initially this involves providing hands on training to other stroke research labs in the UK, Europe and USA along with producing a visual guide.