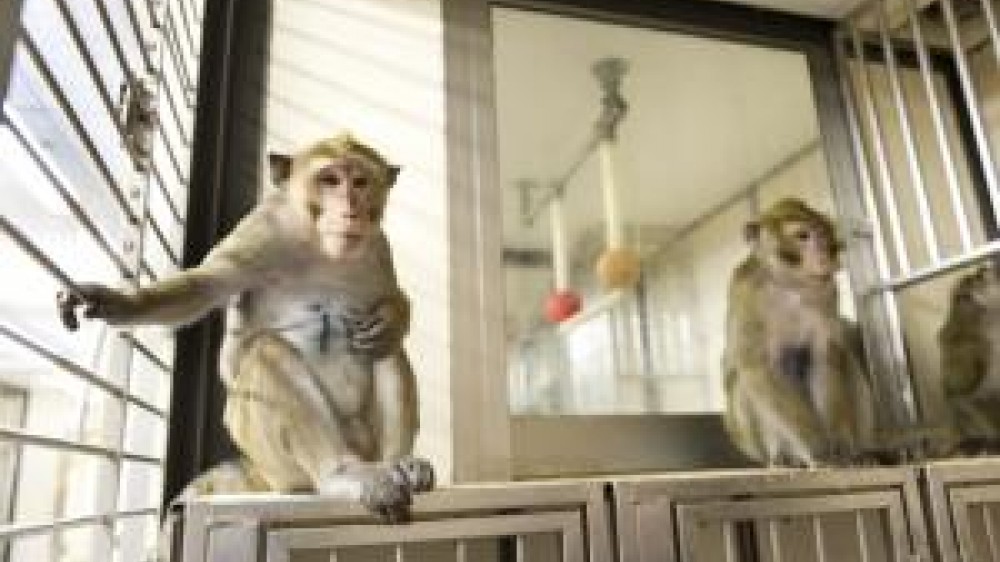 Scientists at Newcastle University have developed a novel automated system for positive reinforcement training (PRT) of macaque monkeys, suitable for use in breeding and research facilities.

The new system was funded by an NC3Rs pilot study grant and is described in a paper published recently in Journal of Neuroscience Methods.

Behavioural neuroscience experiments using macaques require the monkeys to perform many repetitions of motor, cognitive or other tasks for small food or fluid rewards. Typically training to perform the tasks requires animals to be separated from their social group and home cage environment, and in some cases to have their access to food and fluid controlled.

The Newcastle team, led by Dr Andrew Jackson, have developed a robust and inexpensive operant conditioning system that allows unsupervised and voluntary training of macaques while they are housed in social groups. It consists of a button press task (with variable levels of difficulty) cued by LEDs lights and reinforced with fluid rewards (see image). The apparatus can be attached to the home cage or a standard primate/restraint chair in the laboratory. A version of the system also incorporates a RFID microchip reader for automatic identification of which monkey is using the system. 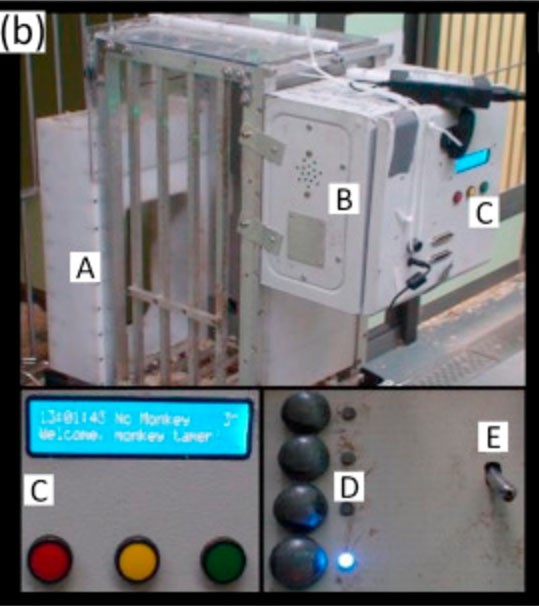 Conventionally, macaques learning motor or cognitive tasks would do so in the laboratory, only after several weeks of acclimation to the unfamiliar training environment. In this study, 16 female rhesus macaques were exposed to the system in their home enclosures at the MRC Centre for Macaques and later in the research facility at Newcastle University. The monkeys learned the tasks within weeks of home enclosure training, and more quickly than animals trained using conventional methods. They achieved high levels of performance (~200-300 trails per 60 minute session at ~80% correct) without the need for social isolation or food/fluid restriction, thus representing a valuable refinement of training procedures.

Importantly, animals that acquired the task at the breeding facility subsequently performed better at the university, when tested in their home cages and in the laboratory. This suggests that automated PRT systems can facilitate subsequent laboratory training, and may also be used at the breeders to identify those animals most suited for behavioural neuroscience research.

Research Associate and co-author of the paper, Jennifer Tulip said: “Sustained voluntary use of the system in the absence of any dietary need suggests interaction with the apparatus may be enriching for the animals.”

Importantly, animals that acquired the task at the breeding facility subsequently performed better at the university, when tested in their home cages and in the laboratory. This suggests that automated PRT systems can facilitate subsequent laboratory training, and may also be used at the breeding establishment to identify those animals most suited for behavioural neuroscience research.

The system is now in regular use at Newcastle University. Commenting on the study, Dr Jackson said: “This is a big step in terms of refining the training of macaques. It is also the first study to initiate automated positive reinforcement training at a breeding centre before animals are issued to a neuroscience facility. The differences we observed between animals at an early stage suggest automated training at the breeding centre could serve as an indicator of how much time will be required to train subsequently, allowing animals to be matched with appropriate studies.”