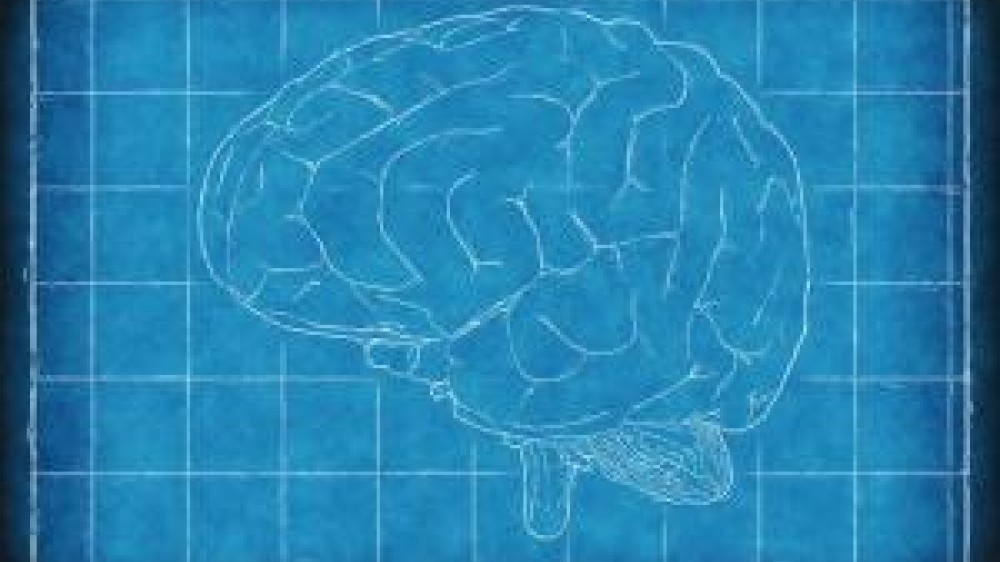 For World Brain Day 2020, we take a look at some of the latest findings of NC3Rs Grant holders who are using 3Rs methods to provide insights into neuroscience.

How do you begin to understand the most complex of human organs? With billions of cells and trillions of connections, making sense of our brains is no mean feat. But our understanding of what makes us tick has come a long way since Aristotle first proposed the brain acted as a radiator for the heart.

And still, it seems the more we understand, the more questions we must answer.

NC3Rs-funded researchers are among the many scientists contributing new ideas to neuroscience, using methods developed to replace, reduce or refine the use of animals in the field. Read on to learn what they’ve discovered about the brain.

The shape of your brain influences how nauseous you feel

For some people, long car journeys can be the bane of existence leaving them feeling nauseous and yet others are completely nonplussed. But, what is it that makes some people so susceptible to nausea?

Professor Qasim Aziz from Queen Mary, University of London trained a machine learning network to predict whether someone was likely to suffer from nausea with over 80% demonstrating that it was possible to avoid the use of animals in studies that traditionally required in vivo models. Qasim asked volunteers to watch a video known to cause motion sickness while their brains were scanned using a functional MRI machine. In this way he identified a network of multiple brain regions that processed the feeling of nausea. He also determined that nausea severity related to the shape of particular regions of the volunteer’s brain that were part of this network.

The shape of particular parts of your brain (marked in green) relate to increased nausea severity.1

Biomarkers such as these can help to identify drugs to prevent nausea and recognise when animals need interventions to prevent them feeling nauseous in experiments, improving their welfare.

Consisting of a layer of endothelial cells the blood brain barrier acts as an interface between the brain and the circulatory system. The cells prevent passage of large molecules and solutes from the blood to the brain but allows the nutrients the brain needs to pass through. 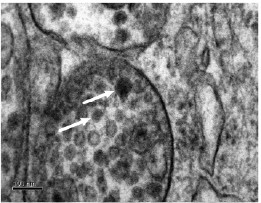 It was known that Japanese encephalitis, a mosquito-borne virus, was able to enter the brain and infect the central nervous system. But it was not clear exactly how the virus managed to break through or pass the blood brain barrier. During her David Sainsbury Fellowship, Dr Adjanie Patabendige developed an in vitro model of the blood brain barrier as a replacement for rodent models used in encephalitis research.

Using the model, Adjanie showed the Japanese encephalitis virus infects the brain endothelial cells, releasing a cascade of pro-inflammatory mediators. These increase the permeability of the blood brain barrier allowing increased viral transmission into the brain itself.

Drosophila can be used to model mammalian prion disease

Prions are unique as an infectious agent as unlike all other agents, they contain no genetic material. Instead, these misfolded proteins transmit their misfolded shape, causing normal variants of the protein to also misfold. Prions cause neurodegenerative disease in various species, which are rare but invariably fatal.

These diseases are also infectious and can be spread between individuals of the same and different species. The most well-known prion disease in the UK is Bovine Spongiform Encephalopathy (BSE), due to the outbreak in the 1990s caused by individuals eating infected beef.

There are a lot of unknowns with prion disease, including exactly what proteins or cellular machinery are needed for neurotoxic prions to be generated. Mammalian models are frequently used and this work demonstrated that Drosophila, which do not naturally possess the prion protein or any orthologue for this gene in their genome, could be used as an alternative. 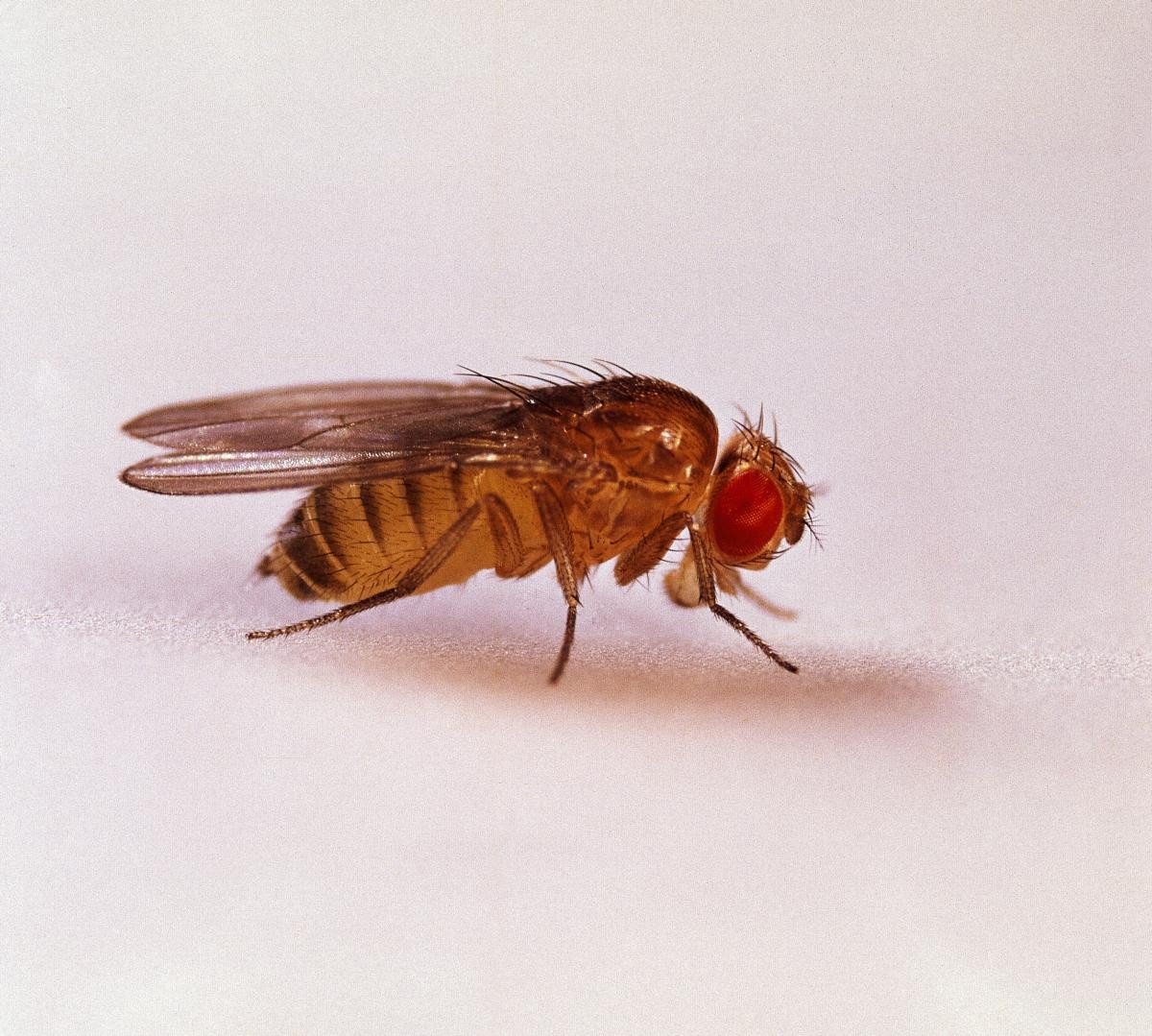 Drosophila can be used as an alternative model for ovine and bovine prion disease in research and screening.

Dr Raymond Bujdoso genetically modified flies to contain the prion protein gene. With this genetic modification alone, the Drosophila were susceptible to three mammalian prion strains and demonstrated progressive accumulation of misfolded prion protein. These flies can now act as an alternative model for both research and screening purposes replacing the use of mammalian models.

Injuring your spinal cord is often a life changing event. The spinal cord carries signals between the brain and the rest of the body. Spinal cord injuries prevent these signals being transmitted and in humans can result in loss of sensation and muscle function and potentially paralysis. This is not the case for zebrafish.

At all stages of life, zebrafish can successfully regenerate their spinal cord, restoring function and enabling signals to again be passed between the body and the brain. Axonal connections extend past the lesion, the site of damage, regenerating and reconnecting to enable the fish to regain swimming function.

Axons are able to bridge the lesion in the zebrafish larval model enabling regeneration of the spinal cord.1

But how? And what differences are there between zebrafish and mammals that allow this to happen?

In both mammals and zebrafish, the initial response is inflammation caused by an immune response. However, this is where the similarities end, which was demonstrated in a larval zebrafish model developed through an NC3Rs Studentship awarded to Professor Catharina Becker. The student, Dr Themis Tsarouchas demonstrated how zebrafish tightly control the immune response by rapidly downregulating inflammation, primarily through macrophages, to enable neural regeneration. And when the zebrafish were genetically engineered to prevent this downregulation, representative of the mammalian situation, neural regeneration was notably impaired. At this early stage the embryos are not considered capable of suffering and they therefore provide a replacement for the use of other animals.

CADASIL is an inherited disease that thickens the blood vessels in the white matter of the brain. It typically results in multiple mini-strokes throughout a patient’s lifetime, which leads to neural degeneration. No specific treatments are available and the molecular mechanisms underlying the condition are unknown.

Approximately ten different mouse models have been developed to try and better understand CADASIL, but none replicate the disease fully. During his NC3Rs PhD Studentship awarded to Dr Tao Wang, Dr Joseph Kelleher developed the first in vitro iPSC model of CADASIL. Skin biopsies from CADASIL patients were used to generate the stem cells, which could then be differentiated into endothelial cells (cells that line the interior of blood vessels) and mural cells (cells that cover the outside of vessels) – two cell types identified as being affected by CADASIL pathology. 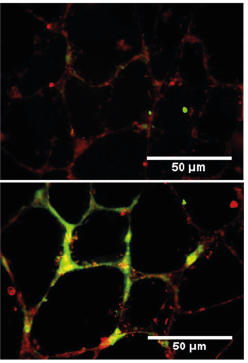 Using this model, Joseph showed that mural cells were unable to support the development of new capillary vessels and could induce apoptosis in surrounding endothelial cells. The cells also had reduced expression of VEGF, a growth factor that promotes the growth of new blood vessels. These likely contribute to the inability for neural cells to recover after the multiple mini-strokes and the resultant degeneration. All findings in the iPSCs were validated in primary cells from CADASIL patients and could help to find new treatments.

Tau proteins misfold and aggregate in neurons in a number of neurodegenerative diseases, eventually causing the cell to die and contributing to the pathology of the disease. However, it is not known exactly how the accumulation of tau in this way results in the death of the cell. And if the cell dies, it is not possible to treat it to try and restore function.

Professor Maria Grazia Spillantini developed and characterised an in vitro cell culture system using neurons isolated from transgenic mice to better understand how aggregated tau causes cell death. Cell cultures previously did not replicate tauopathy as tau did not spontaneously aggregate in the culture systems. Maria’s model allowed cells to be cultured in vitro for up to eight weeks, reduced the use of live mice and importantly, these cells did spontaneously develop pathological forms of tau.

Using these cell cultures, Maria showed that aggregated tau activated microglial cells, phagocytic cells that remove damaged or infected neurons to ensure a healthy brain. The activated microglial cell would then go on to engulf the neuron. Maria also showed by inhibiting the “eat me” signals given out by the neurons, the phagocytosis could be prevented – a strategy that might allow neurons to continue living long enough for treatment. 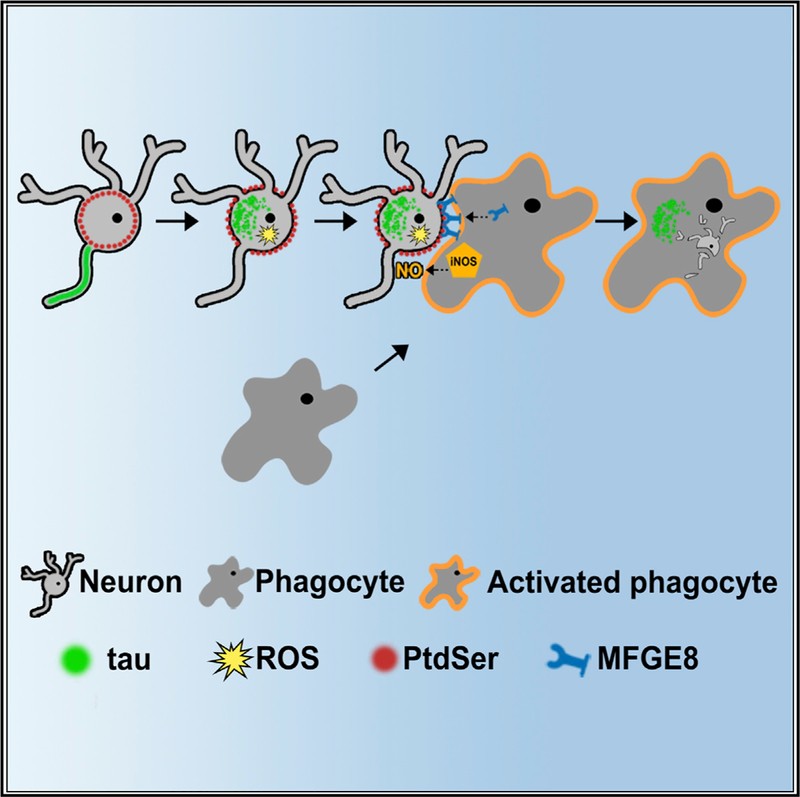 Proposed mechanism for how aggregated tau in neurons results in the cell being phagocytosed.1

You can discover more 3Rs methods in neuroscience by looking up What we do in this research field.

1 Images are taken from the respective featured papers.