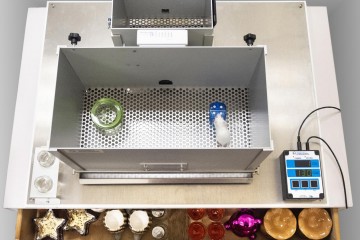 Spontaneous recognition tasks are widely used as a laboratory measure of different memory types in animals. These studies are often run such that only one trial a day is collected for each rodent, with the animal being handled during delays (whilst objects are being changed) and between trials (which are typically run on different days), increasing anxiety in the animals and affecting reproducibility of the data. This leads to high levels of behavioural noise which results either in the use of large numbers of animals to produce sufficient statistical power or ambiguous results that can be misinterpreted.

Dr Alex Easton (Durham University), together with Campden Instruments (a commercial developer of behavioural testing equipment) has developed the semi-automated continual trials apparatus that includes a testing chamber in which the animal can explore objects and a holding chamber where the animal rests undisturbed whilst objects are changed. An automatic door opens between the two chambers to allow the animal to shuttle between them without being handled. The apparatus also incorporates a camera to capture the animal’s behaviour throughout its time in the testing chamber for scoring later and a prototype behaviour scoring app. The apparatus allows the use of substantial (24h) delays between sample phase (familiarisation with objects) and test phase (introduction of novel object), whilst retaining the benefits of the continual trials approach, by running all sample phases on day 1 and all test phases on day 2.

Having validated the effectiveness of the technology in both rats and mice on object recognition and object location memory, Dr Alex Easton sought collaborators to expand the application of the apparatus. With the support of CRACK IT Solutions funding Alex and Campden Instruments are now working with researchers across four universities (St Andrews University, University of Edinburgh, Open University and Bristol University) to: