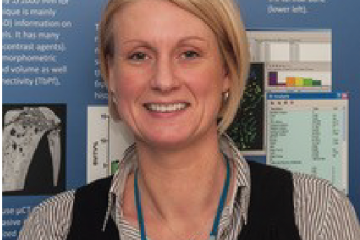 This award aims to replace mouse models of myeloma by developing 3D in vitro models of multiple myeloma dormancy, recapitulating the bone marrow environment where myeloma cells interact with osteoblasts.

Dormant multiple myeloma cells are thought to cause disease relapse after treatment in patients. These cells can resist current treatments, residing in endosteal niches with osteoblasts before repopulating the tumour after treatment has finished. Mouse models of multiple myeloma are used to assess potential therapeutics and their mechanisms of action, as well as their impact on dormant myeloma cells. Models include injecting multiple myeloma cell lines via the tail vein, which engraft in the bone marrow forming tumours. The severity of these models are defined as causing moderate suffering under the UK’s Animals (Scientific Procedures) Act 1986 due to the high tumour burden the animals experience, which can result in end-stage limb paralysis. Dr Michelle Lawson has previously demonstrated that myeloma cells can be induced to enter dormancy in 2D culture using osteoblast-conditioned media. She has since extended this research to grow osteoblasts and myeloma cells using scaffolds to better recapitulate the 3D endosteal niche the cells inhabit in vivo.

The student will expand on Michelle’s preliminary data to develop a 3D in vitro model of myeloma cell dormancy. They will evaluate the use of two different scaffold types to determine which is a better representative of the niche using both myeloma cell lines and patient-derived cells. The student will then validate the models by treating with anti-myeloma therapies and comparing the results historic in vivo and in vitro data to build further confidence in the model. They will develop skills in in vitro models, fluorescent microscopy and flow cytometry.

Multiple myeloma (MM) is a B cell cancer caused by the growth of malignant plasma cells in the bone marrow (BM). It remains incurable, despite the development of therapies that target myeloma cell (MC) -intrinsic pathways. Disease relapse is thought to originate from dormant MCs localised in specialised endosteal niches, residing in close proximity to osteoblasts, which resist chemotherapy and repopulate the tumour. To recapitulate the BM microenvironment in an in vitro setting is highly challenging because of the cellular complexity, vasculature and 3-dimensional (3D) bone structure. However, since we know osteoblasts play a key role in MC dormancy and they reside on bone surfaces in close proximity to the extracellular matrix (ECM), this will provide a platform to mimic this in vivo aspect in vitro.

Therefore, the aim of this 3Rs focussed PhD studentship is to develop several in vitro 3D models of MC dormancy and then validate them by comparing them to new and existing data from established clinically relevant murine models of MC dormancy and drug resistance. This will ultimately lead to a significant reduction in animal use and in some cases a complete replacement of animals in myeloma research.

Preliminary findings: Previously we have shown that in vitro MC dormancy is induced by factors in osteoblast -conditioned media or in co-culture with osteoblasts. Furthermore, using a murine model of myeloma we have shown that amongst proliferating MCs in the BM, dormant MCs are present and they reside in close proximity to osteoblasts lining bone surfaces. Since we now know that osteoblasts play a key role in MC dormancy we decided to extend our initial 2D in vitro culture systems to further to recapitulate the complexity of the BM by creating 3D structures similar to bone and the ECM. PolyHIPE 3D scaffolds or 3D collagen type 1 extracellular matrices (ECMs) were seeded with human or murine MCs, osteoblasts or co-cultures of both and growth was assessed using scanning electron microscopy (SEM), a cell viability assay or fluorescence imaging. Osteoblasts were observed to adhere to PolyHIPE 3D scaffolds using SEM imaging and the growth of both cell types displayed no obvious toxicity. Similar results were observed using the ECMs. Taken together these data confirm both 3D structures were biocompatible.

Research plan: We aim to develop and validate several 3D in vitro models of MC dormancy which recapitulates the interaction of MC-osteoblastic cells in the BM microenvironment in vivo i.e. induces MC dormancy. We will do this by assessing and characterising dormant MCs in these newly established 3D in vitro models so they can be used reliability as effective alternatives to murine models of myeloma to assess new and novel anti-myeloma therapies. We hypothesise that in vitro 3D models of MC dormancy will mimic the dormant MC’s observed in the endosteal niche in the BM of currently established in vivo pre-clinical models of myeloma.

3Rs Impact: Over the last 5 years on average there has been 144 publications/year using murine models of myeloma to assess anti-myeloma therapies and their mechanisms of action. Approximately 50 mice are used in each study which equates to the use of ~5400 mice/year (~36,000 mice in 5 years). Therefore, locally in my own research laboratory this could lead to a reduction in over 200 mice/year and, with increasing interest in this area in the wider scientific community, this could lead to a reduction of ~1000 mice/year nationally. In total the number of animal experiments could be reduced by ~75% worldwide saving at least 27,000 mice over 5 years.