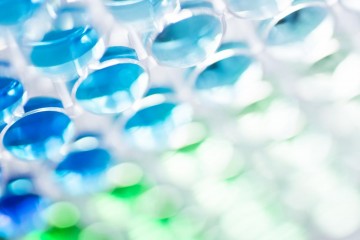 Mutations in the CFTR gene cause cystic fibrosis where a thickened mucous coats the epithelial cells of the airway, reducing mucociliary clearance and enabling pathogens to persist for longer in the lungs. The fungal pathogen Aspergillus fumigatus causes severe allergic disease in up to a quarter of individuals with cystic fibrosis. Transgenic mice can be used to model opportunistic infections in cystic fibrosis but typically do not show similar lung phenotypes to humans. This has resulted in a number of other mammalian models being developed, such as ferrets, sheep and pigs, which do show more similar characteristics of disease. However, all species used in cystic fibrosis research are more likely to suffer with intestinal blockage, as cystic fibrosis also results in mucous in the digestive system becoming thick, which blocks normal digestive function. In vitro models using immortalised cells from cystic fibrosis patients can be used in research, but it is difficult to attribute any changes specifically to the cystic fibrosis mutations rather than other genetic variability, preventing uptake of the models.

Dr Sara Gago (Co-Investigator) has previously developed a method for mutagenesis of bronchial cells with CRISPR/Cas9 through her NC3Rs Training Fellowship. Using these methods, the student will generate specific mutations in the CFTR gene to create disease-associated genetic variants and healthy controls enabling any differences between the cell types to be attributed to the cystic fibrosis mutations. These cells will then be challenged with a pooled library of A. fumigatus mutants to determine the fungal factors involved in pathogenicity and demonstrate the utility of the newly developed cell lines. The student will also develop skills in confocal microscopy, sequencing and analysis of the proteome, transcriptome and cytokine profiles.

Cystic fibrosis (CF) is the most common fatal genetically inherited disease in Caucasian populations. This disease is caused by mutations in the cystic fibrosis transmembrane regulator gene (CFTR) which produces defective ion fluxes and calcium homeostasis in the epithelia. Patients with cystic fibrosis are therefore susceptible to recurrent and lethal lung infections including those caused by the fungal pathogen Aspergillus fumigatus.

Animal models play a central role in the study of cystic fibrosis. Researchers have used mice, ferrets, pigs and sheep to model the inflammatory response seen in human patients with this disease. Although such models generate useful knowledge on the pathophysiology of this disease, animal models are limited for a number of reasons. One is the ethical concerns about the numbers of mice that needed to generate gene or tissue specific knock-outs which likely die early after birth. Additionally, mice, the most common vertebrate animal used, do not completely recapitulate the disease phenotypes seen in the human lung during infection and larger vertebrate such as sheep, pigs and ferrets are often used instead. The use of larger animals intrinsically has a number of limitations including housing space, high cost of the experimentations and the need to use very high number of animals to get enough statistical significance. In vitro cell culture systems using immortalised cystic fibrosis epithelial cells from donors have been developed to overcome those problems. However, genetic variability between healthy immortalised and cystic fibrosis cell lines prevents precise and statically useful comparison of events in CF and control cells which has limited them to be widely adopted by the community.

Here we propose to establish a new in vitro model of isogenic cystic fibrosis and healthy controls bronchial epithelial cell lines carrying different CF mutations in the CFTR gene using CRISPR/Cas9 mutagenesis of 16HBE bronchial cells. Using an established methodological approach developed in our laboratory including in vitro infection, confocal microscopy, expression analysis, cytokine measurements and competitive fitness analysis the student will be able to define critical stages of the interaction between the cystic fibrosis epithelia and A. fumigatus compared to healthy cells and the fungal factors governing this process.

The successful completion of this project will achieve a number of scientific objectives. Firstly, the development of an isogenic cell culture system of epithelial cell lines will be of great value for researchers focused on the study of epithelia-pathogen interactions in cystic fibrosis without using any mice. Secondly, screening of A. fumigatus null libraries on CF epithelia will increase our knowledge on the pathogen factors leading persistence in the context of disease. Additionally, the student will be enrolled in a 3Rs focused programme that will give the student the opportunity to enrol with industrial partners in Manchester and our fungal community to promote the implementation on this resource in other laboratories at an international level. As a PhD studentship we will also provide extensive training opportunities for a student, and the wider research community, on the importance of alternatives to replace animal testing.