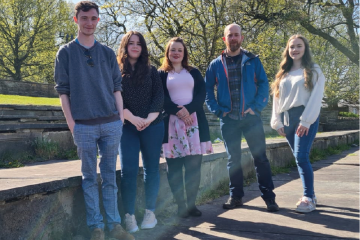 This award aims to reduce and refine the use of mice in cell cycle kinetic studies by developing a knock-in mouse model using genetically encoded cell cycle probes that enables each cell cycle phase to be identified.

Disrupted cell cycle regulation resulting in altered cell cycle lengths is common in human disease, including in cancers and birth defects. Cell cycle kinetics in development and disease is studied in mice typically by introducing a nucleotide analogue that is incorporated into the DNA during the cell cycle. Using nucleotide analogues requires the animal to undergo repeated injections or mini-osmotic pumps to be surgically implanted. Cell cycle probes are a more recent technology that enable longitudinal live imaging of animals over multiple timepoints without the need to cull animals for tissue. However, the probes are currently unable to discriminate between all cell cycle stages (for example, there is no discrimination between the S and the G2/M phases) and are difficult to detect with antibodies limiting their uptake and potential 3Rs impact. Dr Richard Mort and colleagues have developed a cell cycle biosensor that incorporates three fluorescent cell cycle probes, each with epitope tags for antibody detection. They have tested this system in vitro and demonstrated the ability to identify, and discriminate between, each stage of the cell cycle.

The student will now introduce this system into a mouse model, using CRISPR/Cas9 to insert the construct and generate transgenic mice. They will use the in vitro cell line to establish confocal imaging methods before using these protocols in the newly developed mouse model. The student will also develop skills in immunohistochemistry, ex vivo tissue culture and quantitative imaging techniques.

Healthy tissues develop normally and are maintained through a tightly regulated cell cycle (or proliferation program). Lengthening or shortening of the cell cycle is a fundamental disease mechanism in development, ageing and cancer. It is likely that many developmental diseases are caused at least in large part by early defects of cell proliferation and many studies are now using mouse models of these conditions to explore this hypothesis in numerous systems. Mouse cell cycle kinetics are often investigated using thymidine analogues such as BrdU - incorporated into DNA during S-phase. These techniques rely on multiple injections or the surgical implantation of mini osmotic pumps to deliver the analogue.

Recently, genetically encoded cell cycle probes have been developed and these are key to refining proliferation assays because they can be combined with live-imaging efficiently generating large datasets from fewer animals. Of these, the best existing model is the R26Fucci2aR (developed by RLM) reporter model because of the 1:1 stoichiometry of probe expression and the ability to control expression spatiotemporally with Cre-recombinase. However, a number of shortcomings still exist: 1) It does not discriminate S-phase from G2/M-phases 2) It does not discriminate G1 from quiescent cells in G0. 3) The probes are technically difficult to detect with antibodies limiting them to live studies.

In order to address these shortcomings, we will develop a next generation Quiescence and Cell Cycle Indicator (QuCCI) and Rosa26 QuCCi knock-in reporter mouse. QuCCi incorporates the tried and tested probes p27K-,hCdt1(Cy-) and hGem(1/110) fused to mCerulean, mCherry and mVenus respectively, including unique epitope tags. QuCCi can discriminate between cells in G1, S, G2/M and G0.

The Student will join an existing team across Lancaster University (UK), Edinburgh University (UK) and McGill University (Canada) who have already committed time and resources to the development of the model. The team that we have assembled to support the studentship is perfectly placed to facilitate the project because we have extensive experience and proven track records in developing multicistronic constructs and cell lines, generating transgenic mice using CRISPR/Cas9 technology including the insertion of large constructs using injection into two-cell embryos and in performing image analysis and quantitative imaging techniques.