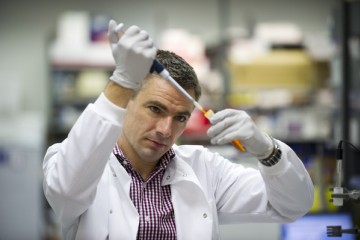 In a previously funded NC3Rs Project Grant, Dr Emerson developed and validated a refined method for studying platelet thromboembolism in mice. This model allows for the study of a developing thrombus in vivo by radiolabelling platelets isolated from a donor mouse and injecting them into a recipient mouse under terminal anaesthesia. A sub-lethal dose of clotting agent is then administered and platelet accumulation measured non-invasively in real time. This model avoids the severe suffering associated with the use of death as an endpoint in conscious animals, which was the endpoint in the model traditionally used by groups in the field.

This Project Grant aims to replace mice required for platelet donation by using radiolabelled human platelets in a refined model of platelet thromboembolism.

Donor mice comprise approximately 50 to 60% of the mice required in the refined protocol. If the impact of drugs is being studied, these must be administered to the donor mice prior to the study often by gavage. The feasibility of using human platelets was confirmed in a pilot study with NOD-scid mice. Dr Emerson’s previous NC3Rs project grant reduced the number of mice needed from 200 to 30 per experiment. Replacing mouse platelets with human platelets could reduce numbers further to 15 mice required per study.

Blood will be collected from healthy human donors and the platelets isolated by centrifugation. These will then be radiolabelled before transfusion into the anaesthetised recipient NOD-scid mouse. Circulating platelets are monitored in the pulmonary vasculature and in the refined mouse model stable counts can be detected over two hours. Initially, experiments will be carried out to confirm whether a similar stable time frame exists for human platelets and whether they remain active after this time. The latter will be established by analysing whether the human platelets respond to ADP and other platelet agonists.

The humanised mouse model will also be validated by analysing platelet responses to aspirin, which can be given at low doses for an anti-thrombotic effect. Finally, the feasibility of evaluating the effect of a drug, such as aspirin, in a study by giving the drug to a human volunteer prior to platelet donation, rather than to the mouse, will be assessed.

Until recently, assessing platelet thromboembolism in mice involved the injection of thrombogenic substances into conscious animals to induce death or paralysis. This procedure inflicted considerable pain and suffering and was scientifically limited since it only modelled one extreme end-point of a disease with a broad spectrum. An NC3Rs research grant awarded in 2006 allowed us to refine this methodology so that we recorded non-lethal responses in anaesthetised mice by monitoring radiolabelled platelets in real-time. As well as refining a procedure from a severe to unclassified level, we were able to reduce mouse use by recording multiple responses within an individual animal. Our refined model involves the death of large numbers of donor mice that are bled for platelets which are radiolabelled and subsequently reinfused into recipient animals. We will now show that human donors can be used instead of mice to reduce mouse use by 50% and reduce the numbers of mice subjected to drug administration procedures. To achieve this we shall infuse radiolabelled human platelets into mice to create a humanised-mouse model. We intend to fully characterise the humanised-mouse as a model of thrombosis by extending our preliminary data by conducting experiments confirming normal physiological platelet responsiveness in our model together with supporting histological analysis. Additionally, we shall demonstrate that in vivo pharmacological experiments with agents such as aspirin can be conducted by giving aspirin to human volunteers rather than gavaging donor mice. In addition to the 3Rs benefits, the development of humanised-mouse models has scientific advantages in enabling us to investigate human rather than animal cells in a controlled, potentially genetically modified, in vivo environment. We intend publishing our work in a high quality peer reviewed journal and participating in stakeholder, scientific and public dissemination events. The 3Rs impact of our work will occur not only within our own group but with groups already collaborating with us by applying our refined methodology to their own research.