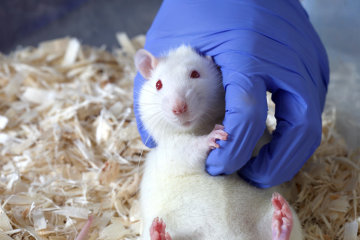 This award aims to maximise the positive welfare benefits of rat tickling and investigate whether tickling also increases the reproducibility of research.

Rat tickling is being increasingly recognised as a social enrichment and an effective means to improve laboratory rat welfare. The standard method of rat tickling involves tickling the back of the neck before flipping the animal and tickling the underside. The tickling mimics elements of play and rats have been shown to emit ultrasound vocalisations in response, indicative of a positive welfare state. However, this varies between animals and not all rats vocalise in response to tickling. This suggests more work is needed to ensure where rat tickling is used it provides the maximum benefits to the animals.

The research team, led by Professor Alistair Lawrence, will compare different methods of tickling and assess the emotional responses of male and female rats using ultrasound vocalisations and a novel test of emotional state (an affective bias test). In addition the project will assess the effect of tickling on standard anxiety tests as well as physiological markers of stress and inflammation. The team will also determine whether tickling also increases the reproducibility of research by reducing the variation of behavioural and physiological responses in the animals.