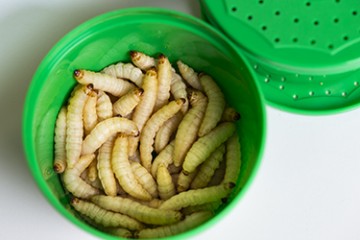 Galleria mellonella larvae have been widely used over the past five years as non-mammalian models of microbial infection and for antimicrobial drug screening. Advantages of G. mellonella larvae over other invertebrate models include the ability to carry out experiments at 37°C and to precisely dose individual larvae with drugs/microorganisms by injection into a defined site. However uptake of the model has been limited due to significant variation in the behaviour of larvae both within and between batches.

The team at BioSystems Technology Ltd has developed TruLarv; research grade Galleria mellonella that are weight and age defined, surface decontaminated and inbred from a gemone sequenced breeding colony without the use of antibiotics or other drugs. As a result they behave more consistently and reproducibly than larvae from other sources, such as pet shops.

Through CRACK IT Solutions, BioSystems Technology Ltd sought partners involved in antimicrobial drug discovery to integrate TruLarv into their screening platforms. They are now working with Demuris, an antibiotic discovery company who have access to a large, unique collection of actinomycete bacteria which are thought to produce completely novel antibacterial drugs.

BioSystems Technology Ltd has been awarded funding through CRACK IT Solutions to work with Demuris to utilise the TruLarv model to screen crude actinomycete extracts for potential new antimicrobial drugs. Successful validation of this approach as an early toxicity and efficacy screen will enable rapid selection of promising leads and ensure poorly efficacious compounds are not progressed to animal studies.

Full details about this CRACK IT Solution can be found on the CRACK IT website.

In this proof-of-principle study, fifty crude actinomycete extracts which already show some antimicrobial activity on agar and potentially novel modes-of-action were selected from the Demuris collection. These crude extracts have unknown toxicity and efficacy profiles in vivo, data which is essential for Demuris to select the most promising lead targets. In this study the utility of G. mellonella as a screening tool for predicting efficacy and toxicity profiles in these extracts has been assessed.

In vivo toxicity measurements of complex bacterial extracts in TruLarv™

TruLarv™ was used as an early screen to evaluate complex bacterial extracts for acute toxicity. Forty one crude extracts (CE1-41) were screened individually in groups of five TruLarv™ in an acute toxicity assay, with larval survival scored 24 hours, 48 hours and 72 hours post challenge, used as the endpoint.

In vivo efficacy measurements of complex bacterial extracts in TruLarv™

Extracts had previously been screened for Gram-negative and Gram-positive antimicrobial activity in vitro using disc diffusion assays. Initially seven crude extracts were selected for further screening to test for in vivo antibacterial activity against the Gram-negative pathogen Pseudomonas aeruginosa (CE29, CE30 and CE31) and the Gram-positive pathogen Staphylococcus aureus (CE38, CE39, CE40 and CE41). To determine the in vivo activity of the extracts larvae were concurrently dosed with either 10μl of P. aeruginosa or S. aureus in one proleg and 10μl of crude extract in another pro leg. Larval survival was measured at 19 hours post- infection. Of the three crude extracts that were tested, CE29 and CE30 showed antimicrobial activity against P. aeruginosa and extract CE39 and CE40 showed activity against S. aureus.

Based on the initial screening a number of extracts were chosen for compound identification and dereplication by several rounds of chromatography and fractionation and subsequent LC-MS analysis. This process identified that extract CE41 contained the broad spectrum antibiotic paromomycin, demonstrating the potential of the G. mellonella model for identifying important antibiotics. The identification and dereplication of the active compounds from the other extracts is on-going.

Dr Nick Allenby, CSO at Demuris Ltd said:  “Through this NC3Rs-funded project Demuris has been able to use G. mellonella as a model system for the early stage toxicity evaluation of antibiotic compounds produced by actinomycete bacteria. The model enabled us to gain valuable early toxicity measurements allowing us to prioritise strains of interest for further development. Following on from this project Demuris will continue to use the model for toxicity evaluation and we are now using G. mellonella to evaluate the efficacy of our antibiotic compounds against a range of bacterial pathogens. Being able to prioritise compounds in this way will allow us to make better go/no-go decisions and reduce the number of compounds entering regulatory animal studies.”