In March 2017, the NC3Rs, in collaboration with AstraZeneca, organised two workshops at the Institute of Animal Technology (IAT) Congress. The aims of the workshops were to explore practical approaches to providing laboratory rats with increased opportunities to exercise and to perform natural behaviours in a more complex, enriched environment than is often provided for them.

The workshops featured short talks on rat behaviour as well as group break-out sessions to explore the barriers to adoption and how to implement practical refinements to the environment of laboratory rats.

Aimed primarily at animal technicians, the workshops were attended by around 50 participants in total, drawn from academia, pharma and biotech, clinical research organisations and other relevant bodies with an interest in laboratory rat welfare. Participants at the workshops gained two IAT CPD credits. 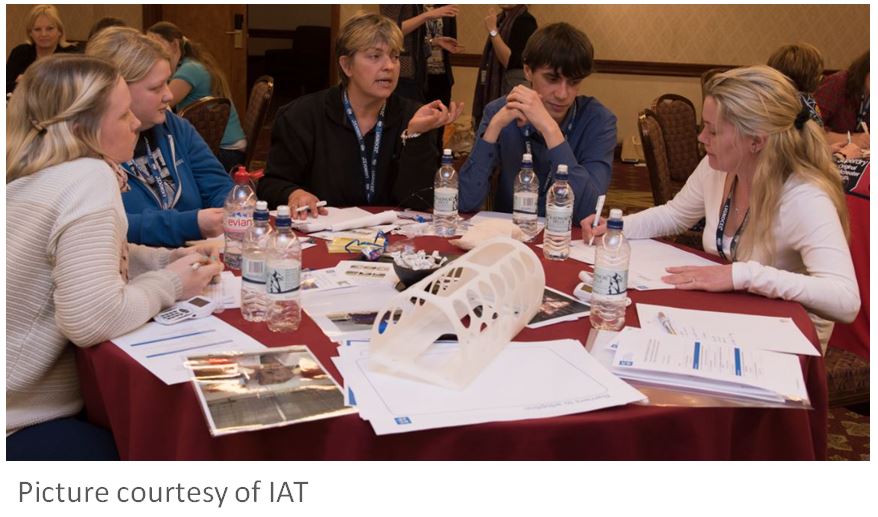 The key objectives of the workshops were to:

The programme for the workshops can be found here.

At the start and end of each workshop, delegates were asked to participate in voting sessions to find out more about their motivations to attend, views on giving rats opportunities to exercise and whether they had changed as a result of the group discussion. The majority of participants worked with laboratory rats and the most common types of studies undertaken with the rats included animal models of disease, behavioural studies and breeding/genetic modification. Top motivations for technicians joining the workshops included learning more about the topic and wanting to do more for the rats in their care. The raw data from the interactive sessions can be found here.

Highlights from the speakers

The first presentation was given by Dr Manuel Berdoy from Oxford University Biomedical Services who illustrated, using excerpts from his 2002 film The Laboratory Rat: A Natural History (1), the innate needs of laboratory rats. In the film, Wistar and Lister Hooded laboratory rats were released into an outdoor enclosure to mimic their wild habitat and observed over six months as they adapted to their new environment. Despite generations of domestication, the footage shows that the laboratory rat is capable of expressing behaviours that are rarely, if at all observed in standard laboratory housing. The film addresses the following topics and Manuel showed how several of them are relevant to the issue of keeping animals in captivity by showing data from wild and laboratory studies (2). As Manuel stated, "we may have taken the rat out of the wild but we have not taken the wild out of the rat".

Topics addressed in the film:

The 27 minute film, The Laboratory Rat: A Natural History, can be viewed here.

The purpose of providing laboratory animals with environmental enrichment from a welfare perspective is to facilitate opportunities for them to demonstrate their species-specific natural behaviours. Winner of the NC3Rs 2016 3Rs Prize, Dr Joanna Makowska from the University of British Columbia, Canada, described her research comparing the behaviours of female Sprague-Dawley rats in two different caging types; standard caging and semi-naturalistic caging. Joanna's study (3) showed that laboratory rats have a high motivation to perform several natural behaviours that they are unable to perform when housed in standard caging. In semi-naturalistic caging, young rats burrowed approximately 30 times per day, climbed 75 times per day, and stood upright 180 times per day. These behaviours were not possible in standard cages. The study also provided evidence that space and height restrictions of standard cages may lead to stiffness and positional stress in rats, which the animals attempt to alleviate through exceptionally high rates of lateral stretching compared to animals housed in semi-naturalistic cages. Joanna also spoke about the importance of rat socialisation and positive rat-human interactions as a source of dynamic enrichment for rats.

The ability to burrow, stand upright and exercise appears to be particularly important to rat well-being and behavioural restrictions may lead to poor physical and psychological health. Previous research has suggested that sedentary rodents that have continuous access to food and little environmental stimulation may not be ideal animal models for research (4). 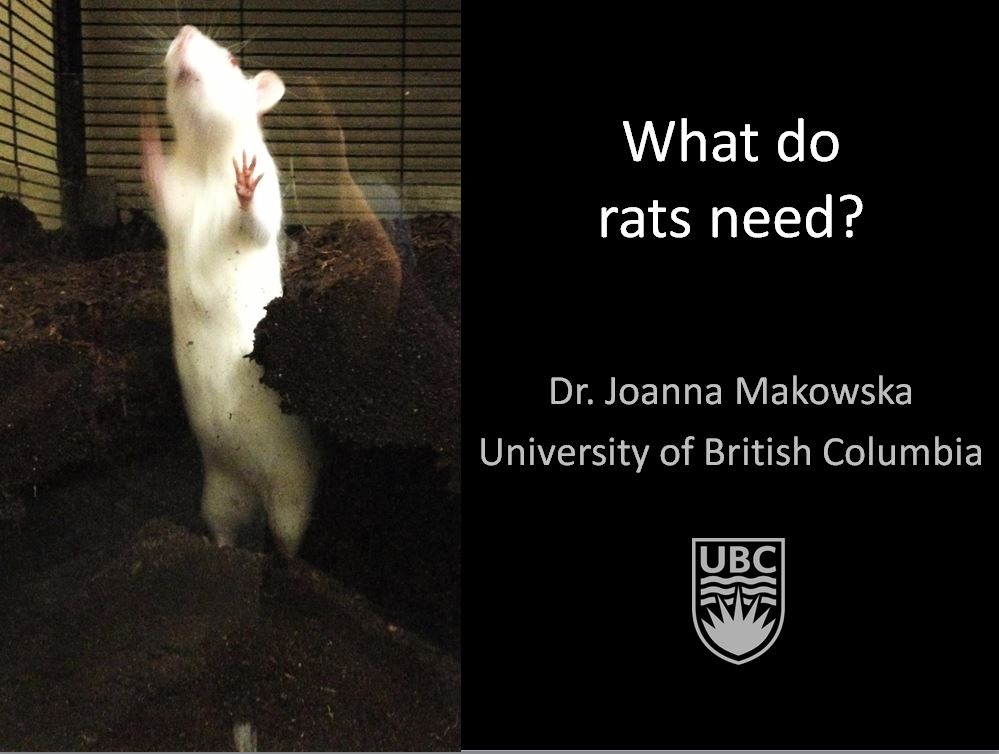 A poster summarising the key findings of Joanna’s work can be viewed here.

The slides from Joanna’s talk can be viewed here or by clicking on the image on the right.

A short video of the rats in Joanna’s study exploring the semi-naturalistic cage environment can be viewed below.

Next, Kate Shenton, a scientist at AstraZeneca described a pilot project underway at AstraZeneca to provide telemetry rats with increased opportunities to exercise by creating a playpen using a modified rabbit cage.

Kate decided to investigate the idea to provide an exercise pen when AstraZeneca changed from using telemetry rats in short-term studies to reusing a colony of rats that were housed long-term. Thirty male Wistar rats were permanently housed in standard caging in pairs (15 telemetry plus 15 companion). In groups of eight to 12, the rats were given intermittent access to the enriched playpen area. The playpen contained water trays, ladders, ropes, tunnels, substrate and treats were scattered throughout. Initially, the rats were introduced for five minute sessions to habituate them to the space. Animals were initially closely observed and no aggression was seen. The rats were placed in the play area two to three times per week and the time spent in the playpen gradually increased. The rats were usually left in the pen for 30 minutes, without continuous observation and sometimes were left in the pen for several hours, though they were never left overnight. The rats made good use of the space and enrichment ideas and technicians observed that the rats were more confident, interactive and calm when handled. Kate emphasized that this was a preliminary study intended to assess the feasibility of implementation with a cohort of telemetry rats and important next steps would be to generate data to demonstrate the scientific impact of the playpen routine on rat welfare, behaviour and physiology.

The slides from Kate's talk can be viewed here.

A short video of the rats exploring the exercise pen can be viewed below.

Highlights from the breakout sessions

Following these scene-setting talks, delegates were split into small groups to discuss ideas on how to create a more complex environment for laboratory rats and to explore potential barriers to adoption and how they could be overcome. A summary is provided below.

Ideas for improving the environment for laboratory rats and opportunities to exercise fell broadly into four categories, as outlined in Table 1, depending on the type of equipment and space required.

Table 1: Ideas for improving the environment of laboratory rats and opportunities to exercise.

Delegates were asked to discuss the potential barriers to the adoption of implementing opportunities to exercise and providing more complex environments for laboratory rats. The barriers broadly fell into the following categories:

Further descriptions of the perceived barriers to adoption are described in Table 2 below.

Table 2: Barriers to improving the environment of laboratory rats and opportunities to exercise. 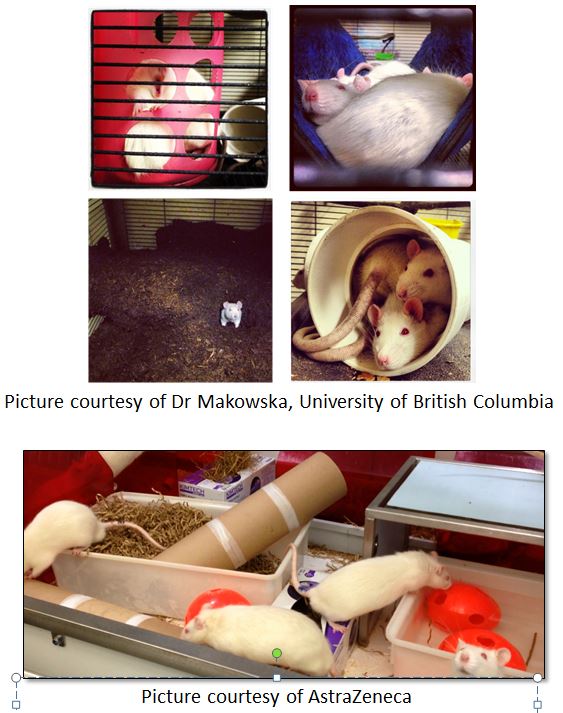 The groups then discussed the ways in which barriers to adoption could potentially be overcome.

1. Data collection – The importance of collecting scientific evidence to support the use of exercise time was highlighted by most groups.

2. Communication and collaboration – It was recognised that discussion and collaboration with scientists, facility managers and budget holders would be vital. Discussions should focus on agreeing which data would be valuable to collect to inform decisions regarding scientific and welfare impacts. The importance of considering the specific interests of each group was highlighted:

3. Pilot studies - Rats not currently involved in experimental studies (e.g. breeding or stock rats housed long-term) were suggested as suitable groups in which to undertake an initial pilot studies to compare against the current standard of care within a given facility. Only once the effects of any change in practice in these groups had been assessed, would it be appropriate to consider more broadly and only in discussion with scientists and other decision makers. The most appropriate approach would then be to implement any changes at the start of a new study rather than during ongoing research.

4. Build a network - The importance of building a network for technicians and researchers to share ideas and communicate positive case studies was discussed. Opportunities to engage with the Home Office and grant funding bodies to support efforts to generate supporting data were also highlighted as potential routes towards increased adoption.

The workshops highlighted that there is significant interest from technicians to improve the complexity of the environment for laboratory rats within their care. Developing some of the ideas outlined in this report and generating the evidence to assess the impact on both the scientific and welfare outcomes may help to facilitate greater uptake in the future. Raising awareness of the innate needs of laboratory rats, collecting data to support adoption of best practice and further dissemination of positive case studies may help to overcome some of the barriers described above.

The NC3Rs is grateful to Sally Robinson, AstraZeneca for assistance in the development of the programme, the IAT for hosting the workshop at the IAT Congress and the workshop speakers and participants for their enthusiastic contributions to the discussion.