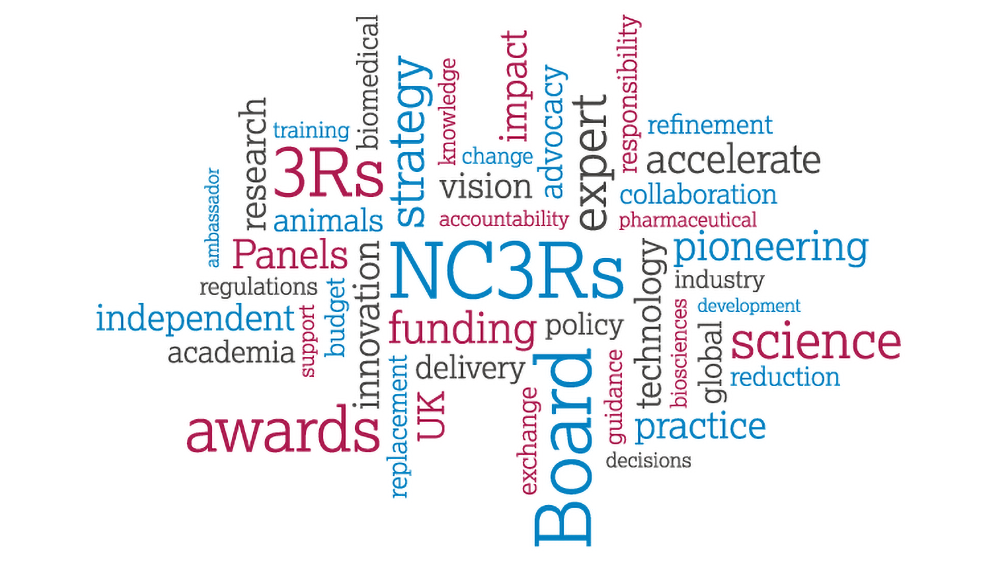 We are pleased to announce that five new members will join the NC3Rs Board from January 2021:

The NC3Rs’ work is overseen by its non-executive Board, which is chaired by Professor Kevin Shakesheff of the University of Nottingham. The Board provides advice on the NC3Rs strategy, monitors the delivery of objectives and ensures financial planning and risk management are robust.

Members of the Board are experienced scientists and animal care professionals based in leading research organisations. While they come from a range of professional backgrounds, they share a commitment to the NC3Rs mission and a proven aptitude for decision-making in science policy.

Professor Shakesheff said: “The NC3Rs is fortunate to have a Board full of people who are committed to our mission and they make a great contribution to shaping our future. I’m excited about the potential of 3Rs research across the UK and internationally and our new Board members will help us, with partners across the world, accelerate the impact of the 3Rs to facilitate even better science.”

There are also five outgoing Board members whose tenure has ended: Dr Paul Brooker, Professor Chris Denning, Dr Paul Finnemore, Professor Blanca Rodriguez and Professor Lucy Walker. Dr Vicky Robinson said: “A huge thanks from me and the whole NC3Rs team to our outgoing Board members. We have been so fortunate to have the support and guidance of these brilliant individuals and, while it is always sad when it’s that time for Board members to step down, I know that they will continue to help us champion the 3Rs.”

Professor Jane Hurst is the William Prescott Chair of Animal Science and Head of the Mammalian Behaviour and Evolution Group at the University of Liverpool. Her main research interests are scent communication in mammals, animal welfare (particularly that of laboratory animals), humane rodent pest control, the evolution of different mammalian social strategies, and the interactions between behaviour and disease. She led the original research into non-aversive mouse handling methods, which won the 2010 3Rs Prize and has since been developed into key resources in partnership with the NC3Rs.

Jane is currently Deputy Chair of the BBSRC Appointments Board and a member of the Royal Society’s Research Appointment Panel B. She served as the President of the Association for the Study of Animal Behaviour (ASAB) from 2010 to 2012 and was awarded the ASAB Medal in 2017. Jane was awarded an OBE in the 2020 New Year Honours for services to animal welfare.

Dr Tom Matheson is a Reader in Neurobiology at the University of Leicester and a Senior Fellow of the Higher Education Academy. He studies how nervous systems control behaviour, with interests in sensory-motor processing, neuronal plasticity and biomechanics. His team combines electrophysiological recording techniques with quantitative behavioural analyses to study the natural aimed limb movements of insects. In other research he explores the interactions between organisms and their environment – particularly in the context of locust swarm formation. His multidisciplinary research involves collaborations with engineers, mathematicians, molecular biologists and statisticians.

Tom carried out his PhD at the University of Canterbury in New Zealand before undertaking a series of postdoctoral positions at the University of Cambridge. He then moved to a lectureship at the University of Leicester before being promoted to Reader. Tom has previously sat on the NC3Rs Grant and Training Fellowship Assessment Panels, and the NC3Rs Expert Working Group for Impact. He is currently a member of BBSRC Grant Panel A and is a former BBSRC Advanced Research Fellow and BBSRC Research Development Fellow.

Professor Cathy Merry is Professor of Stem Cell Glycobiology at the University of Nottingham. Her interdisciplinary research group works to understand the role of glycosaminoglycans (complex sugars) in the cell biology of healthy and diseased tissues. Currently the group is focused on creating models of disease that recapitulate the natural extracellular matrix. She studied Biochemistry at the University of Manchester, during which time she spent a year working for Amgen Inc. in California. She remained at Manchester, working at the Paterson Institute for her PhD and postdoctoral work, before establishing an independent research group in the School of Materials. Following a sabbatical at Uppsala University in Sweden she returned to the UK to join the School of Medicine at the University of Nottingham where she now works in the Nottingham Biodiscovery Institute and is Deputy Director of Research for the School.

Professor Nick Plant is Deputy Vice-Chancellor of Research and Innovation at the University of Leeds, and a Professor in Systems Biology. His research interests focus on how the body coordinates its response to chemical challenge, using computational approaches to predict the health impact of chemical exposure. He has worked with partners from academia and industry to integrate complex datasets from disparate experimental approaches, increasing our understanding of the processes that lead to fatty liver disease and breast cancer.

Nick was enrolled as a Fellow of the Royal Society of Biology in 2016. He has served on the Committee for Toxicity on Chemicals in Food, Consumer Products and the Environment, as well as the Medicines and Healthcare Products Regulatory Agency Pharmacovigilance Expert Advisory Group and Nicotine Containing Products Working Group. He has also been a member of the NC3Rs Grant Assessment Panel, Fellowship Panel and 2018 3Rs Prize Panel. Since 2015, he has been on the roster of experts for the Joint FAO/WHO Expert Committee on Food Additives (JECFA).

Nick’s appointment was originally made in 2019, but he will take up his position on the Board from January 2021.

Dr Clive Roper is Director of the department of In Vitro Toxicology at Charles River Laboratories. His department currently performs regulatory in vitro skin absorption, in vitro respiratory toxicology, in vitro safety pharmacology, investigational and mechanistic toxicology focussed on tissues and 3D models.  The department innovates and develops New Approach Methodologies to evaluate safety and efficacy using cells, 3D models and tissues. Following post-doctoral research at Newcastle University, he joined Inveresk Research (acquired by Charles River in 2004) as a Research Officer. After serving in study director and scientific manager roles, he became Head of In Vitro Sciences and subsequently Director of In Vitro Toxicology.

Clive has been actively involved in advising regulatory agencies as well as industry bodies in understanding and acceptance of existing and New Approach Methodologies. He is also a member of the global Charles River 3Rs Working Group and a founding member of the North American 3Rs Collaborative.