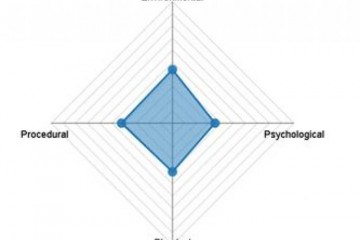 There is a growing market to develop biosensors for the straightforward, fast and low-cost detection of biomolecules. The recognition element in these tests is traditionally based on antibodies, which are expensive, relatively unstable and require a large number of animals in their production. However, these antibodies could be replaced with ‘plastic antibodies’ known as molecularly imprinted polymers (MIPs), that can mimic the properties of natural antibodies and are able to overcome the drawbacks associated with their development and use.

Dr Marloes Peeters, from Manchester Metropolitan University, has developed a biosensor platform with MIPs on the surface of the electrodes. Binding of biomarker targets to the MIP layer on the sensor could be measured using multiple readouts including temperature changes, gravimetry (extremely sensitive mass detection) and electrochemical techniques. This process is one of the most promising approaches for production of biosensors as it ensures rapid, accurate and low-cost in situ analysis (using disposable sensors) and is easily integrated into portable devices.

Through CRACK IT Solutions, Dr Peeters sought collaborators to further develop and validate the biosensor. With the support of CRACK IT Solutions funding, she is now working with MIP Diagnostics Limited and a clinical partner, to prepare and validate a biosensor using MIP nanoparticles for the thermal detection of cardiac biomarkers. The biosensor will be validated using cardiac biomarkers in human serum samples from patients diagnosed with myocardial infarction, but is applicable for use in other industries such as basic research or pharma (e.g. detection of cardiac biomarkers in animals). After consulting with end-users of the technology, a commercial prototype of the portable biosensor platform will be developed and showcased to demonstrate the technology and identify potential commercialisation partners.

Around 15 million cardiac biomarker tests, using antibodies as recognition elements, are performed annually in the UK. Currently, each batch of antibodies that is generated requires between one and five animals (including mice, rabbits, goats and primates) to be immunised and ultimately sacrificed. Every MIP that is produced for a specific target avoids the immunisation and subsequent sacrifice of these animals. In 2013, nearly 10,000 animals were used in the UK to produce monoclonal and polyclonal antibodies. MIPs can directly replace the use of traditional antibodies for use in bioassays to detect cardiac biomarkers, reducing the number of animals required for antibody production.

Full details about this CRACK IT Solution and the outputs from the funded research can be found on the CRACK IT website.

Videos aimed at a non-specialist audience, ​​​​​​funded by an NC3Rs public engagement award: