Refining food and fluid control in behavioural neuroscience with macaques 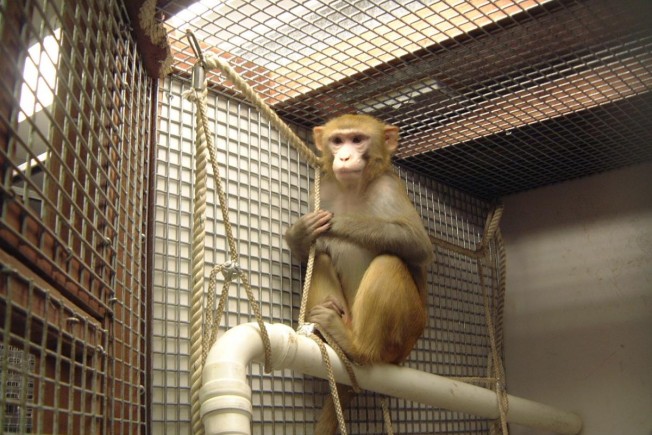 We have published guidelines on the use of food and fluid control in behavioural neuroscience experiments with macaque monkeys which have refined the procedures used in laboratories nationally and internationally.

Control of food or fluid intake is commonly used in neuroscience experiments with macaques in order to motivate the monkeys to perform extended sequences of responses on behavioural tasks while electrophysiological recordings from the brain are made. The control can involve strict scheduling of the time for which food or fluid is available, or a reduction in the total amount of food or fluid provided per day - either way, hunger or thirst becomes a key motivator for reliable performance.

Depending on how they are implemented, food or fluid control can elicit physiological and behavioural responses that compromise animal health and welfare. Coupled with the relatively lengthy periods over which behavioural neuroscience experiments are conducted, these issues make the use of food and fluid control protocols the subject of much concern and debate.

We previously convened an expert working group, which included many of the UK’s leading neuroscientists, to consider opportunities for refining the use of food and fluid control. Based on a systematic review of the scientific literature, sharing and analysis of protocols and data, and the expertise of the members, a report recommending best practice was published in the Journal of Neuroscience Methods in 2010. Key recommendations include:

The working group also contributed to a discussion of the use of conditioned reinforcers and varaible-ratio schedules, published in Journal of Neuroscience Methods in 2012.

Areas for further research to support improvements to animal welfare were  highlighted in the working group's report. We awarded funding for a PhD studentship to Professor Alex Thiele and Dr Candy Rowe from Newcastle University to address questions relating to the level and duration of fluid control and its impact on macaque welfare.

A pilot study grant was awarded to Professor Andrew Jackson, also at Newcastle University, to develop and test an automated system that allows monkeys to be pre-trained while group-housed and without the use of food or fluid control. Subsequently, we awarded a grant to Dr Steven Kennerley of UCL to transfer the tablet-based Mymou home cage training system to eight research groups around the UK.